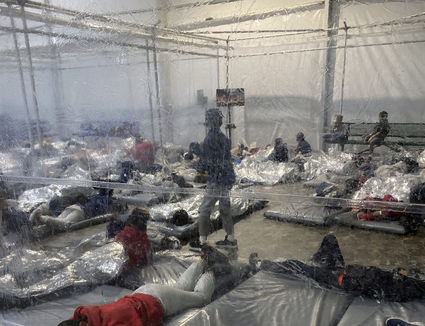 This March 20, 2021, photo provided by the Office of Rep. Henry Cuellar, D-Texas, shows detainees in a Customs and Border Protection temporary overflow facility in Donna, Texas. President Joe Biden's administration faces mounting criticism for refusing to allow outside observers into facilities where it is detaining thousands of immigrant children.

President Joe Biden's administration has tried for weeks to keep the public from seeing images like those that emerged Monday, March 22, showing immigrant children in U.S. custody at the border sleeping on mats under foil blankets, separated in groups by plastic partitions.

Administration officials have steadfastly refused to call the detention of more than 15,000 children in U.S. custody, or the conditions they're living under, a crisis. But they have stymied most efforts by outsiders to decide for themselves.