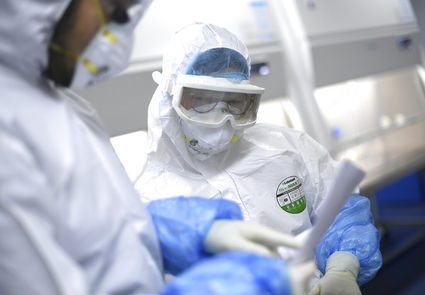 Two staff work in the pop-up Huoyan Laboratory specialized in the nucleic acid test on 2019-nCoV in Wuhan in central China's Hubei province Thursday, Feb. 06, 2020, the first day of its operation. The P2-level biosafety lab was built in five days, designed to perform 10,000 2019-nCoV tests per day, to cope with the coronavirus outbreak. (FeatureChina via AP Images)

The scientists aid a new investigation is needed that includes a thorough examination into the possibility that COVID-19 could have escaped from a lab in Wuhan, China.

The WHO's report "failed to reach some of the most basic standards of credible analysis and assessment," the open letter stated.

A group of 24 scientists issued an open letter Wednesday demanding a full investigation into the origins of COVID-19 that includes a thorough examination into the possibility the virus could have escaped from a lab in Wuhan, China.

The scientists said the World Health Organization's report on the origins of the pandemic, which concluded the lab leak hypothesis was extremely unlikely, "failed to reach some most basic standards of credible analysis and assessment," noting that the report contained 12 incorrect, disputed, contradictory and imprecise statements used to downplay the theory.

"Well over a year after the initial outbreak, critical records and biological samples that could provide essential insights into pandemic origins remain inaccessible," the letter stated. "This withholding of key resources that could and should have been made available undermined the credibility of the joint study team work."

The scientists said that a new investigation should be convened that strips China and any other government of veto power over the scientists selected to probe the pandemic's origins. The Chinese government had such veto powers over the WHO's recently-concluded origins investigation. (RELATED: If Not The WHO, Then Who? Critics Say COVID-19 Investigation Requires A New Treaty, A Do-Over, Or Better Intelligence)

They added that whistleblower processes need to be in place to ensure Chinese scientists can "share relevant information without fear of retribution."

Security personnel stand guard outside the Wuhan Institute of Virology in Wuhan as members of the World Health Organization (WHO) team investigating the origins of the COVID-19 coronavirus make a visit. (Photo by HECTOR RETAMAL/AFP via Getty Images)

Security personnel stand guard outside the Wuhan Institute of Virology in Wuhan as members of the World Health Organization (WHO) team investigating the origins of the COVID-19 coronavirus make a visit. (HECTOR RETAMAL/AFP via Getty Images)

The scientists flagged multiple comments from China's top bat-based coronavirus researcher Dr. Shi Zhengli that the WHO's report used to downplay the lab leak theory as being incorrect or contradictory.

Shi was quoted in the report saying "all fieldwork is done with full PPE," which the scientist said was in contradiction with photographic and video records showing limited PPE use by Shi's colleagues at the WIV.

The letter also highlighted that the WHO report relied on incorrect and contradictory statements Shi had issued regarding a deleted WIV database in Sept. 2019 that contained samples of at least 16,000 virus samples it had studied prior to the pandemic.

The WHO team did not even ask to review the deleted WIV database during their investigation because the sole U.S. member of its delegation, Dr. Peter Daszak, had personally vouched for the lab and said there was no relevant information in the database.

Daszak's inclusion in the WHO's investigation mired the probe with allegations of conflicts of interest. Dazsak worked closely with the Wuhan Institute of Virology prior to the pandemic and his nonprofit group, EcoHealth Alliance, funneled $600,000 in taxpayer funds to the WIV to study bat-based coronaviruses in China prior to the pandemic. (RELATED: US Grant To Wuhan Lab To Enhance Bat-Based Coronaviruses Was Never Scrutinized By HHS Review Board, NIH Says)

The open letter was first reported Wednesday by The New York Times.

The letter's co-organizer, Jamie Metzl, told the Daily Caller News Foundation in a statement that interested governments should develop a new and independent process for investigating the origins of the pandemic if the Chinese government refuses to cooperate and the WHO's governing body refuses to revamp its investigatory processes.

"Although most people would be stunned to learn that a year and a half after the pandemic began, with millions dead and the lives of billions disrupted, there is no process in place for comprehensively investigating all origin hypotheses, that is unfortunately the case," Metzl said.

"As we state in the open letter, 'Calling for a full investigation into the origins of the pandemic by the best available means is not intended to point fingers at any one country. Its purpose is to leave no stone unturned in seeking to understand how this catastrophe began so we can prioritize efforts to address our greatest shortcomings for the benefit of all people and all nations,'" he added.

The scientists aren't alone in calling for a new investigation into the pandemic's origins. (RELATED: There Are A Lot Of Reasons To Be Skeptical Of WHO's Report On COVID-19 Origins)

WHO director-general Tedros Adhanom Ghebreyesus said on March 30 his organization's mission in Wuhan did not sufficiently investigate the lab leak theory and said further studies are necessary.

And President Joe Biden's State Department issued a joint statement with 13 democracies on March 30 expressing concerns over the WHO's origins investigation.

"Together, we support a transparent and independent analysis and evaluation, free from undue influence, of the origins of the COVID-19 pandemic," the statement read. "In this regard, we join in expressing shared concerns regarding the recent WHO-convened study in China."

Content created by The Daily Caller News Foundation is available without charge to any eligible news publisher that can provide a large audience. For licensing opportunities of our original content, please contact [email protected]