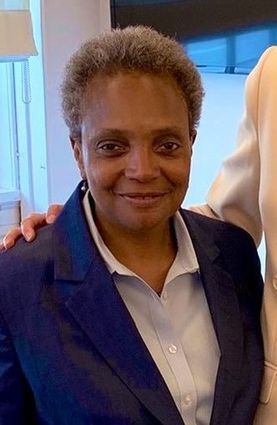 The lawsuit, dated Thursday, May 27, and filed in the United States District Court for the Northern District of Illinois, Eastern Division, alleges that Lightfoot's denial violates the DCNF and Catenacci's First Amendment rights and Catenacci's right to equal protection under the 14th Amendment.

"It's absurd that an elected official believes she can discriminate on the basis of race," DCNF Editor-in-Chief Ethan Barton said. "Mayor Lightfoot's decision is clearly blocking press freedom through racial discrimination."

Lightfoot announced earlier this month that she would grant one-on-one interviews "only to black or brown journalists." Since then, the Chicago Democrat has not granted interview requests to any white reporters.

Catenacci sought to interview Lightfoot about a variety of topics regarding COVID-19 and the city's efforts to vaccinate its population.

Lightfoot denied Catenacci's request by "failing to respond in a timely manner," the lawsuit said, noting that "on information and belief," Lightfoot is aware that Catenacci is "not a journalist of color."

"Preventing journalists from doing our jobs in such a blatantly discriminatory way is wrong and does a disservice to our readers who come from all backgrounds," Catenacci said. "Every journalist and every person who consumes the news should be concerned by Mayor Lightfoot's actions."

"This affects everyone," he continued. "I look forward to holding the mayor accountable."

Content created by The Daily Caller News Foundation and is being reprinted under a creative commons license.