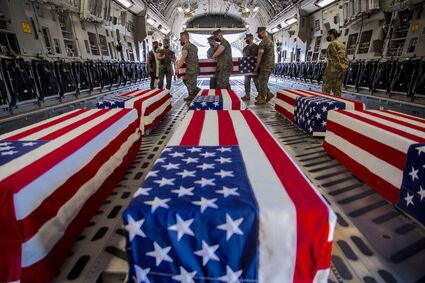 Remains of Marines and sailor killed in AAV incident arrive in Dover Air Force Base, Del., on Aug 12, 2020.

summer announced a lawsuit today against the manufacturer of the amphibious-assault vehicle that sank with the men inside.

The lawsuit, to be filed on behalf of the families of eight Marines and one Navy sailor who died on July 30, 2020, alleges defects in the AAV's cargo hatch door left the servicemen trapped inside the vehicle with no way to get out.

The service members, ranging in age from 18 to 22, were taking part in a maritime training mission about 80 miles west of Encinitas and went down in water nearly 400 feet deep.

Seven members of the crew aboard the AAV were able to escape the sinking craft and survived.

The body of one Marine was recovered shortly after the accident. The naval Undersea Rescue Command recovered the other victims' remains from the sea floor eight days later.

Attorneys said the nine servicemembers spent 45 minutes trying to open the AAV's hatch door, but could not force it open or place the door in a locked and open position.

They said the vehicle's manufacturer, BAE Systems, has been aware of the problem for decades.

Annee Della Donna, one of the attorneys representing the families, said BAE ``never bothered to fix it or notify the military. Instead, they've taken billions of dollars from U.S. taxpayers to build these death traps.''

When reached for comment on the suit, a BAE spokesperson issued the following statement: ``We offer our deepest sympathies to the families impacted by this tragedy and we mourn the loss of the nine service members. We are not in a position to comment on ongoing litigation. The U.S. Marine Corps has conducted an investigation into this incident and we would ask you to contact them with any questions directly related to the incident.''

Della Donna said many of the AAVs involved in the training mission were old and had reported maintenance issues, but that even with those problems, the men would have been able to escape the vehicle had the hatch door been operable. 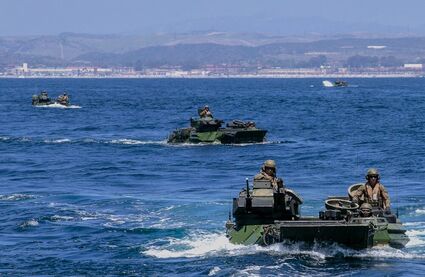 The attorneys also said that despite negligence and human errors alleged on the part of military members in the Marine Corps investigation, the

families are barred from suing the military due to what's called the Feres Doctrine, which prevents service members and their families from filing suit

against the federal government for wrongful deaths or injuries sustained while serving.

In addition to the lawsuit, attorneys and the families are working to get an emergency egress system established on AAVs, which would allow for hatch doors to immediately open, as well as a door designed to open inward to allow easier egress from the vehicle.