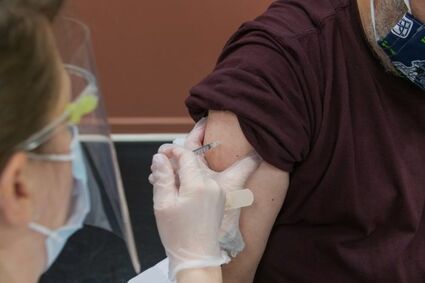 by Wednesday or face getting fired.

The mandate will also apply to all future city employees.

City contractors also must be fully vaccinated, but they have until Jan. 3 to do so.

The city has not made it clear what will happen to any city employee who is only partially vaccinated by Wednesday.

The council voted 8-1 to pass the mandate, with Councilman Chris Cate -- the sole Republican on the council -- as the lone no vote.

Nearly 200 people wrote in and dozens called in to the City Council meeting Monday, the vast majority of whom were opposed to the vaccine mandate.

Amy Reichart from Re-Open San Diego said she listed to the council's comments and the call-ins for two hours. "They made their decision long before today. The San Diego City Council passed an ordinance today that mandates religious persecution and discrimination by government. I don't think they City Council members are informed or understand the implications of what they were voting on. Councilmember Cate asked really good questions and was the lone dissenter."

Reichart continued, "They didn't seem to know that 39% of the people who have contracted Covid (recently) have been vaccinate, according to Dr. Peter McCullough. If people are still catching Covid and even dying from Covid that are vaccinated and they are catching it from their family members who are also vaccinated at home, then what are we protecting them from? The vaccine is being sold as a silver bullet and it's not a silver bullet. Early intervention we know is the best response."

Councilwoman Monica Montgomery Steppe said, ``When I hear people referencing the civil rights movement, Rosa Parks and Martin Luther King Jr. without the experience, that is concerning for me,'' she said . ``I don't equate that to this decision today.

``I don't respect those references, I think they are extremely far-reached,'' she said.

``Nobody is being forced to take the shot,'' he said. ``It is a requirement for certain activities. This is not Jim Crow and this is not

Reichart responded to Councilman Elo-Rivera saying, "You have a choice? Are you kidding me? When you're holding someone's job over their head, that's coercion, not a choice." She also referred to 741 San Diego policeman who aren't taking the vaccine. "This is why we continue to fight. We are trying to stop the Los Angelization of San Diego. I'm sure they would like it to be like Australia. We are exploring legal options against the City right now.

Elo-Rivera said the callers during the meeting using comparisons to the civil rights movement were ``tortured logically.''

Mayor Todd Gloria proposed the mandate on Aug. 26 and had since reached agreements with five of its six recognized employee organizations. The

city was at an impasse with the San Diego Police Officers Association -- which has been a vocal opponent of vaccine mandates -- but in an earlier item that also passed 8-1 Monday, the council overruled the labor group's concerns and imposed the mandate.

``The way out of this pandemic is through vaccines -- and the city of San Diego will lead by example,'' Gloria said last week.

``With city employees regularly interacting with members of the public, this vaccination mandate takes on even more necessity -- not only to

protect the public, but also to protect our city workers.''

The city will provide medical and religious exemptions on a case-by-case basis, as required by law. But any city employee who refuses to get

vaccinated and is not provided with an exemption will be fired.

Cate said he was disappointed the vaccine had become so politicized. He and his wife are vaccinated, he said, and the vaccination effort has ``been

a blessing,'' but he believes individuals should have the choice whether or not to be vaccinated.

Councilwoman Marni von Wilpert, who was diagnosed with COVID-19 in October, said she owed her life to the vaccine, and the situation to combat

misinformation about the virus reminded her of her time with the Peace Corps in southern Africa fighting misconceptions about the AIDS epidemic.

do not require vaccinations.

The association represents more than 1,800 employees, around 700 of whom have refused to be vaccinated so far, said Jack Schaeffer, the SDPOA's

Schaeffer expressed frustration and disappointment at the way he felt the city was overriding individual choice. He and SDPOA's attorney, Bradley

Fields, said the mandate would worsen a staffing crisis within the San Diego Police Department -- which has more than 200 vacancies.

In a survey released in September, around 90% of the 733 San Diego Police Officers Association officers polled believed getting the vaccine should

be an individual choice. More than 300 officers said they'd rather be fired than be forced to take the vaccine.

SDPD Chief David Nisleit said the possibility of losing officers due to vaccine mandates was an issue.

``That's concerning, the possible impacts of if we were to lose officers, you look at this police department, our ratio of officers to citizens

is second-lowest in this nation, so obviously that impacts our ability to respond to crime,'' he said.

``It is in the best interest of taxpayers and residents,'' he said of the mandate. ``It could mean we lose some valuable city employees. I hope they

``But if they do go, I want them to know they are valued and appreciated,'' Whitburn said.

The city will continue to allow its employees to receive a COVID-19 vaccine while on the clock, Gloria's office said. To help employees comply with

the mandate and receive both their first and second doses of a COVID-19 vaccine, San Diego has provided opportunities for on-site, walk-up vaccination at various city facilities and across the city.

To date, nearly 1,300 city employees have been infected with COVID-19 across all departments. San Diego has experienced staffing challenges because of staff being sick or having to quarantine due to COVID-19 exposure, Gloria's office said.

As an example, Gloria said COVID-19 infections have resulted in delays in trash collection on 45 trash routes, 1,030 recycling routes and 45

greenery routes since July 2020. These delayed routes have impacted more than 1.3 million city residents, some on multiple occasions.

Additionally, as a result of rising positive tests, the San Diego Police Department has had to suspend its police academy operations on two

personnel were in isolation at one time due to positive COVID-19 tests.