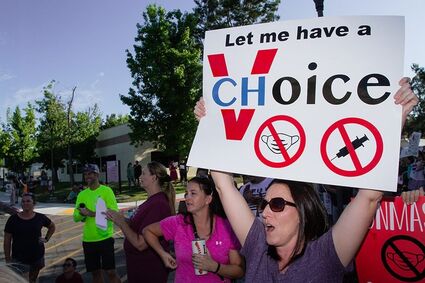 RIVERSIDE  - Two Inland Empire Republican congressmen today joined their GOP colleagues in calling on leaders in the state Assembly and Senate to abandon legislation that would permit children as young as 12 years old to obtain -- without parental consent -- a COVID-19 vaccination, saying the proposal "suffocates the ability of parents to make appropriate health decisions'' for their kids.

"We are gravely concerned about this attack on parents' rights,'' the GOP delegation wrote. "These are the rightful burdens and obligations that require parental involvement.''

The measure would authorize waiver of parental consent to achieve what Wiener characterized as "the autonomy of young people to receive life-saving vaccines, regardless of their parents' beliefs and work schedules.''

"It's unconscionable for teens to be blocked from the vaccine because a parent either refuses or cannot take their child to a vaccination site,'' the senator said.

Parents have voiced their concern that if there is an adverse affect, as has been the case nationwide in thousands of young people, they are the ones responsible, not only to pay medical bills, possibly lifelong, but also to be the caregivers.  Environmental attorney Robert F. Kennedy Jr. says, "There have been no long-term safety studies on these vaccines, especially with children."

The same week that SB 866 was proposed, Pan and Weiner also introduced SB 871, which seeks to revoke the "personal belief exemption'' from the list of objections to receiving a COVID-19 immunization as a condition to admission to public and private schools. The shots would be included with the measles, mumps and rubella vaccinations already required.

"The most effective way to keep schools open and safe is to ensure the COVID vaccination rate of students and school staff is as high as possible,'' Pan, who is a licensed pediatrician, said.

Neither SB 866 or SB 871 have been assigned to committees for hearings yet.

"SB 866 suffocates the ability of parents to make appropriate health decisions for their minor children,'' the GOP representatives said. "It presents dangerous threats to an individual child's health, depending on their personal health circumstances. A student may not have detailed knowledge of their complete health history, including allergies to medication, previous illnesses and other essential medical details that would substantially impact a decision to seek vaccination.''

Issa wrote a letter independently to Gov. Gavin Newsom regarding SB 866, saying "parents have a clear, undeniable right to direct the health, education and safety of their children.''

"Parental engagement is more than beneficial; it is essential to student development,'' the congressman said, in urging Newsom to veto the bill should it reach his desk. "Recent trends in which politicians, educators and school officials undermine and overtake the decision-making of parents are completely unacceptable.''

The governor said the mandate was "about protecting our children and school staff, and keeping them in the classroom.'' He added that the state's mandate would rely on guidance from the California Department of Public Health, the Advisory Committee on Immunization Practices of the U.S. Department of Health and Human Services, the American Academy of Pediatrics and the American Academy of Family Physicians.

According to U.S. Centers for Disease Control and Prevention data published Wednesday, of the roughly 880,500 deaths associated with or coded as COVID-19 nationwide, less than 800 involved victims under 18 years old. Of the 5,918 documented coronavirus-related fatalities in Riverside County, only five have been minors, according to the county Department of Public Health.

Federal health authorities last year approved the Pfizer COVID vaccine for children 5-17. The Johnson & Johnson and Moderna shots are under review for minors, according to the CDC.

City News Service asked Riverside County's assembly members and state senators for comment on SB 866 and SB 871, and most declined comment, though several cited the need for committee hearings to vet the proposals further.

The one lawmaker who did comment, state Sen. Rosilicie Ochoa Bogh, R-Beaumont, told CNS that she was "extremely concerned about what appears to be a constant effort to dismantle the family unit by the California Legislature.''

"I believe it should be our prerogative to do all that we can to support the health and autonomy of our families. We should focus on legislation that empowers our families to make informed decisions and allow them to exercise personal responsibility,'' Bogh said.