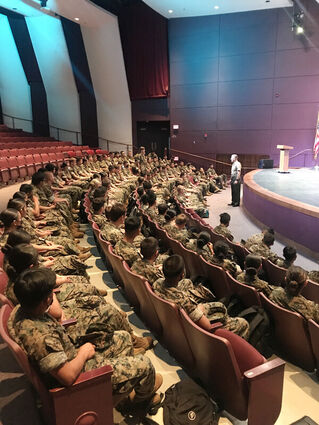 FALLBROOK – Brigadier General Jason Woodworth, commanding general of Marine Corps Base Camp Pendleton, held a leadership forum with 110 cadets from the Fallbrook Union High School Marine Corps JROTC program. He provided the students with his key aspects of leadership, to put others before themselves and to have drive and focus for whatever inspires them. The cadets also had over 30 minutes to ask Woodworth questions. Many of the students said they were very thankful to have this opportunity and were moved by the General's comments.

Submitted by the FUHS MCJROTC program.