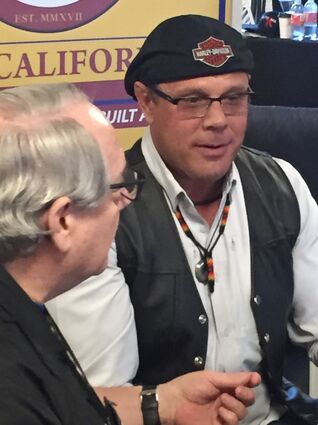 Patriot Streetfighter Scott McKay, right, is being interviewed by Paul Preston on the left. Preston is with The New California State. Village News/Courtesy photo

Day One: Patriotism was alive and well at Clay Clark's Time to Free America Tour during its San Marcos stop at Awaken Church, March 11 and 12. Over 1500 attendants, from all over, decked out in red, white and blue, heard from dozens of nationally known speakers.

Vendor booths were all about saving the environment, saving people, and saving America. Clay Clark, who runs the Thrivetime Business School back east, and has a popular video broadcast, orchestrated the tour.