Theatre Talk on the way to the forum 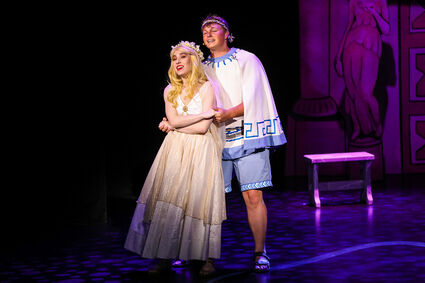 Philia, played by Ava Sarnowski and Hero, played by Cole Harvey, proclaim their feelings towards each other in the Act 1 duet "Lovely" in "A Funny Thing Happened on the Way to the Forum" presented by Temecula Valley Players. Village News/Shawna Sarnowski photo

As hard as it is to accept, I have been forced to conclude, the ol gal ain't what she used to be. The result being, I cannot possibly get to as many shows as I have in the past.

And now, this is not an excuse but a blunder on the theatre's website (and, yes, I shouldn't have waited to the last minute, but it was Donut Sunday when the 6- and 8-year-old grandkids were here plus I was still reeling from the departure of my 9-month-old twin great-grandbaby-boys, and it wasn't until we were driving around through the Poway hills that we realized we had the wrong address and Google was no help at all.

My destination was the Scripps Ranch Theatre to review "I Hate Hamlet" this past Sunday, May 29. It is directed by local funny man Phil Johnson.

As it happened, my husband and I both looked at the website 30 minutes before we were to leave and came up with the only address we found at first glance, on Scripps Poway Parkway. Well, phooey, it is the mailing address. The theater is actually on the Alliant International University's campus at 9783 Avenue of Nations right off Pomerado Road.

By the time we realized our error and when the car clock rolled over to 2:01 p.m., I was stuck knowing I could not arrive past curtain time. However, I will do my best to get to this production after returning from Mexico on the 6th. Mea culpa.

Meanwhile closer to home...at the Brooks Theater, the Oceanside Theatre Company working with Teatro San Diego, is previewing "Sons for a New World" June 3 – 5 with opening night June 10 and running until June 26. Visit http://www.oceansidetheatrecompany.org or call for tickets, 760-433-8900. The Brooks Theater is at 217 North Coast Highway, Oceanside.

The Temecula Valley Players opened the doors June 3 with "A Funny Thing Happened on the Way to the Forum" at the Old Town Theater.

It was written by two of Broadway's most sought-after wordsmiths Burt Shevelove and Larry Gelbart (best remembered for writing M.A.S.H.) and it was the first time Stephen Sondheim wrote both the lyrics and music for a show. He earned a Tony Award for Best Musical and for the record, Sondheim has never looked back.

Director Teri Miller Schmidt has been true to the original script since 1962. Therefore, do not show up and judge content or the players' circumstances because nothing is sacred. There are slaves, pimps and prostitutes called courtesans; there are physical and verbal innuendo, cross-dressing, and double-takes all laced with a sprinkling of the old Vaudevillian broad humor with leanings toward lewd. After all, this Broadway show was never intended for children.

Keep in mind, the show is for mature audiences. It is only right to forewarn parents as this is not a family show and was written well before sensitivity training was a thing. This work is for a broad-minded, sophisticated audience. That said, open your mind and relax. It is just silly.

By now don't we all need a big dose of adult humor? Producer Patti Drew's assurance is the cast will fulfill their jobs. You will be entertained. Read on.

If you are familiar with the raucous movie "Animal House" from 1978, John Belushi single-handedly reinvented the toga-clad Bacchanal as an homage to "A Funny Thing Happened on the Way to the Forum."

The similarities are apparent. "A Funny Thing..." opened on Broadway May 8, 1962, and "Animal House," while decades later, is set in 1962 at the fictitious fraternity housed at Faber College. This particular fraternity is filled with raucous, disorderly, miscreants where nothing is hallowed. Again, before sensitivity training.

Although neither show received warm reviews at first, they have since each found their audiences and both have endured to this day.

It is my surmise that Shevelove and Gelbart were desperate because they reached all the way back to 184 BC for their inspiration. They chose to reimagine ideas by the master of Roman farce, Plautus (254-184 BC).

Written with the same flare as a convoluted Shakespearean comedy, "A Funny Thing..." is filled with misdirection, double entendre, and in the fewest words possible, it's about: "A con-man slave, aided by the chief slave, who fake a courtesans funeral to save her from her pimp in ancient Rome."

The household characters include Pseudolus (Thomas Fisk), a household slave owned by his master Hero who is the son of Senex (Kit Fortier) and Senex's wife, Domina (Sonia Watson).

Scheming for freedom, Pseudolus plays matchmaker for Hero (Cole Harvey) who aches for the lovely Phila (Ava Samowski) who oddly enough lives next-door to Hero with her pimp Marcus Lycus (Peter Varvel) who has promised the virgin-courtesan-in-training to a captain in the Roman legion, Miles Gloriosus (Jared Kramarsky).

Aided by the chief slave of the household, Hysterium (Rossi Smith), who is persuaded to assist in the complicated plan that results in blackmail and disguise, but oddly enough leads to the recovery of Erronius's (Kevin Alcott) long-lost twins (stolen long ago by pirates). 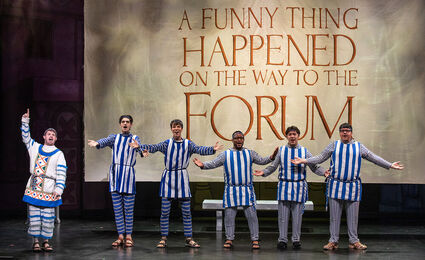 Seen from left, the central character, Pseudolus, played by Thomas Fisk and his Proteans: David Johnson, Jarryd Gooch, Aaron Johns, Juan Vazquez and Joemitchell Sanchez set the stage in the iconic opening number, "Comedy Tonight" in "A Funny Thing Happened on the Way to the Forum." Village News/Shawna Sarnowski photo

Rounding out the cast are the Proteans played by Jarryd Gooch, Aaron Johns, David Johnson, Joemitchell Sanchez, and Juan Vazquez.

By now, don't we all need a dose of unfiltered-adult humor? This is a short run. Don't miss the fun. It's bawdy and filled with mature content. Get a babysitter. Togas are optional.