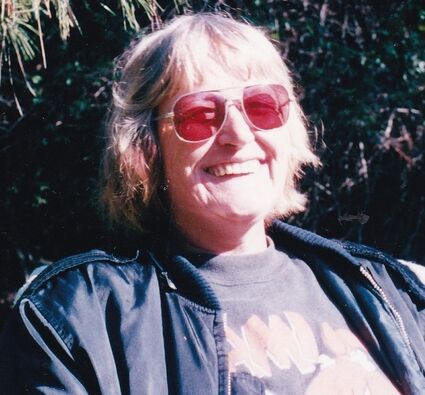 Marymae Fern Liermann, 67 years old, passed away unexpectedly Friday, July 29, 2022, after winning a courageous fight with cancer which began with diagnosis on New Year's Eve. With her passing, there is a large tear in the fabric of Fallbrook.

Mary was born at the old hospital on Main St. to parents Francis (Parky) and Rose Marie Parkinson, July 18, 1955.

She was raised and attended school in Fallbrook except for a short time in Lakeside as a child. She thought of Fallbrook as home and would not consider moving or living anywhere else until recently when her daughter moved to Colorado.

She is survived by her devoted husband, Ken 'Dear'; daughter Donna Wiedenhaupt; sister Dolores Patterson; grandson Trevor Morel, and numerous aunts, uncles, cousins, nieces, and nephews. She was preceded in death by her sons Justin and Daniel Liermann.

After a short lived marriage to Donald (Tony) Anthony which resulted in the birth of 'the love of her life,' daughter Donna, they both met Kenny 'Dear' in 1975 which grew into love and a marriage of 42 years which resulted in 'the boys,' Justin and Daniel.

To know Mary was to love Mary and she considered everyone she knew as part of her family. She could never pass a baby without trying to get a smile or a laugh. She loved being known by the young ones as 'Mom,' 'Aunt,' or 'Grandma' and more recently as 'Miss Mary' even to the people she had never met before.

She started her working career in a warehouse on the Naval Weapons Station, as a service station attendant at Phillips 66 (and later at the Shell and 22 Area Gas on Camp Pendleton). She teamed up with Ken to manage the Blade Tribune deliveries in Fallbrook for years until she found 'her best job' driving a school bus for 16 years within the Fallbrook Elementary School District. During that time, one of her fondest memories was driving the water polo teams around for the '84 Olympics in Los Angeles.

After retiring, she worked as a delivery driver for Semper Fi Florist and she never turned down anyone who needed a ride: to church or the food pantry, to a doctor's appointment or the airport in San Diego or LA, to a casino or bingo at the Firehouse Bar B Que on Wednesday or even just down the street or across town to the store or thrift shop, to the Fallbrook Animal Sanctuary to talk or even help with the animals.

She also worked at the food pantry in San Diego packing the giveaway boxes.

Mary always gave from her heart and she had a very big, strong heart to the end and our hearts are a little heavier since she has gone to be with her Lord and her boys.

A Celebration of Life will be held at Live Oak Park on Sept. 25, 1-5 p.m. Bring a potluck dish to share. Donations will be taken through GoFundMe at https://www.gofundme.com/f/mary-liermann-memorial-fund