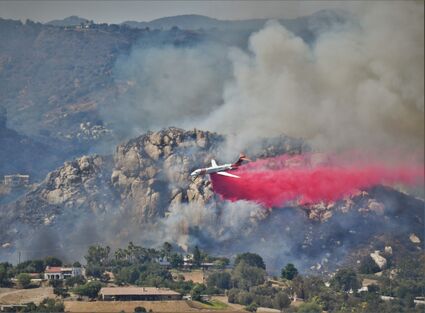 Sept. 5 UPDATE: The Sandia Fire is 100% contained according to NCFPD PIO John Choi. There was one firefighter who was reportedly taken out and transported for possibly heat-related injury. More will be reported as information is available.

6:30 pm UPDATE: The Sandia Fire burned 30 acres on and around Sandia Creek and Rock Mountain and is 10% contained. The forward rate of spread has been stopped as of 4:40 pm. Firefighters will remain on the scene, building a containment line and mopping up hot spots.

3:45 pm UPDATE: The San Diego County Sheriff's Department has issued an evacuation order for homes near Sandia Creek DR. and West Sandia Creek Terrace. If you are in an affected area, they are ordering everyone to evacuate now and head north to Riverside. For emergency assistance call 9-1-1.

More will reported as information is available.

3 pm UPDATE: There are now 30 acres burned according to PIO Choi. He reports crews from multiple agencies are making good progress both from the air and on the ground.

There are road closures at Northbound Sandia Creek Dr. at Rock Mountain Road.

2:43 pm UPDATE: The Sandia fire is currently 15 to 20 acres. Four aircraft have dropped retardant at the head of the fire and crews are making progress on the flanks to the fire," says PIO John Choi. The helicopters are going to get water from any water source close by that's clean.

Kerri McDaniels, who lives on Rock Mountain Dr. said, "They got here quickly, and once they got here, they were just "on it", assessing with a spotter plane, and guys on our driveway with a small crew, and a large crew at the base of Rock Mountain on Sandia Creek and East Sandia Creek Terrace, so they were covering every point they could to assess it and get on it quickly. 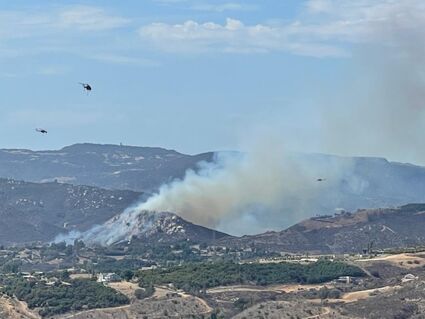 I couldn't believe how many hand crews there were. The firefighters were amazing. The fire was running uphill so fast before the firefighters got here. It was starting to head this way and then the wind shifted a bit and started blowing it west. It was so scary. But now they got on it and got air support right away and then the helicopters flew in a continuous loop for a few hours. Like 5 or 6 helicopters and even one big drop by that big airliner-sized airplane.

2 pm: Currently, a 10-acre fire is burning with a moderate rate of spread, but no structures are threatened at this time, according to NCFPD PIO John Choi. The fire is in the 39000 block of Sandia Creek Rd. north of De Luz Rd.

The North County Fire Protection District is in unified command with Cal Fire San Diego. PIO Choi says they have full aircraft responding. The cause of the fire is unknown at this time and it was reported at 1:34 pm today.