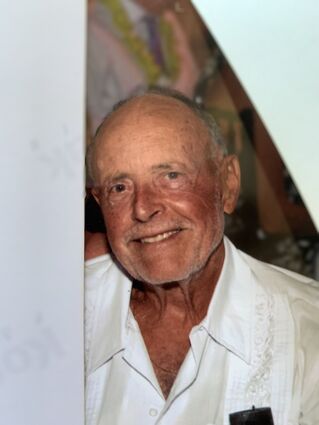 With a saddened heart we share the passing of James Max Stewart, beloved husband, father, uncle, grandfather and admired friend on Nov. 7, 2022. Born Oct. 17, 1941, in Borger, Texas, his parents Minnie Bell and Harvey along with brother Gregory John, made their way to Southern California. He graduated from Redondo High.

Jim served in the Air Force as a cryptanalyst in Okinawa and later transferred to Maryland to join the NSA team in this capacity. Jim always surprised everyone when he spoke Chinese. In 1965 he joined his mother's Real Estate firm in Redondo Beach, but really, he played golf.

He later sold race cars and finally settled down to law school. He received his Juris Doctorate from Mid-Valley School of Law in 1976. He was one of the youngest members to join the Elks Club. He continued to serve them and, in 2000-2001, he held the chair of Exalted Ruler at the Vista Elks Lodge # 1968.

He moved to Mammoth Lakes where he later met Maggie in 1983. It is there he practiced law, skied, fished, snowmobiled, hunted, played golf and became a pilot. He was a founding member of the Mammoth Air Force, a local flying club that brought speakers and years of very successful air shows to town.

Jim and Maggie later moved to Temecula and again opened a law office. In 1992, they finally moved to their forever home in Fallbrook. Jim continued to follow his passions, golfing with friends, hunting, camping and fishing with family. He was a great cook and generous host.

He is survived by his wife, Maggie Stewart; sons and daughters-in-law Kyle Christian and Shirlene Stewart, Scott Harvey and Christine Stewart; daughters Alexis Katrina and Anastasia Elena Stewart; four grandchildren Giovanni, Angel-Lena, Sophia and Ellyson; and his nephews, Randy, Reed, John and Dana Stewart. He will be missed.

Jim will be laid to rest at the Fallbrook Masonic Cemetery on Dec. 3, at 11 a.m., followed by a Celebration of Life at the VFW Post 1924.