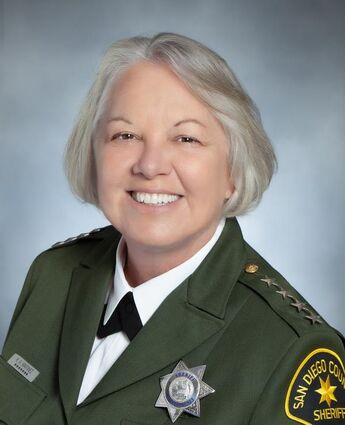 On Dec. 16, the San Diego native took the formal oath as the 31st Sheriff of San Diego County. A ceremonial swearing-in event, during which Martinez will take her oath of office before the public, will take place Jan. 9.

``I am honored to have been elected as the next sheriff of San Diego County,'' Martinez said. ``There is no greater responsibility than to be entrusted with the safety of the public. I am committed to fulfilling that obligation and I am grateful for the opportunity. I will continue to carry out my promise to improve San Diego jails, hire and retain staff and keep our communities safe.''

Martinez has been with the San Diego County Sheriff's Department since 1985, beginning her career as a deputy working in county jails. Her first patrol assignment was in Fallbrook, where she was an investigator and worked several assignments, including drug and gang enforcement in North County and the Criminal Intelligence Detail.

As a sergeant, Martinez supervised a patrol team in San Marcos before being selected to supervise investigators in the Criminal Intelligence Detail. Her next assignment involved investigating employee misconduct in the Sheriff's Internal Affairs Unit before being promoted to lieutenant. As lieutenant, she also oversaw the Sheriff's Department's participation in the Drug Enforcement Administration's Narcotics Task Force.

Martinez served in the cities of Encinitas, Del Mar and Solana Beach, as well as the communities of Rancho Santa Fe and Valley Center.

As a captain, Martinez served in unincorporated Alpine and the rural areas of San Diego County. She was promoted to commander and led the Sheriff's Investigation Units. Martinez's appointment to Assistant Sheriff put her in charge of the Law Enforcement Services Bureau, which encompasses the Sheriff's patrol operations, investigative units, Regional Crime Laboratory, Communications Center and Emergency Services Division.

In 2021, Martinez was appointed as the Undersheriff. In that capacity, she was in charge of the day-to-day operations of the Sheriff's Department.

As Sheriff, Martinez will lead a department that is responsible for providing law enforcement services to 4,200 square miles of unincorporated San Diego County, nine contract cities, seven jails and security for the courthouses. She is also responsible for the Sheriff's Department's $1.65 billion budget and more than 4,700 employees.