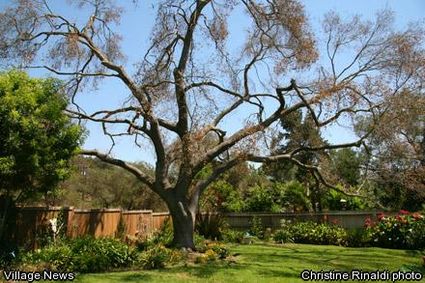 Some residents of Valley Oaks Mobile Home Park are concerned that trees like this one are not being taken care of properly.

The management team at Valley Oaks Mobile Home Park is sandwiched between conflicting tenant opinions regarding the mature oak trees on the pristine, park-like 40-acre property, which houses 212 home sites.

Resident Jean Tucker was awakened in the very late hours of August 4 by a frightening crash. As she would soon learn, a motorist had hit an oak on Reche Road near the Valley Oaks entrance. The collision set the vehicle on fire and scorched the tree’s trunk.

“Just as the car started to catch on fire, a tow truck driver happened to come at the appropriate time,” said John Buchanan, spokesperson for the North County Fire Department. Even before the speedy arrival of fire personnel, “the [tow truck] driver hooked the car up and dragged it away from the tree.” North County Fire wishes to grant the tow truck driver some type of recognition for his heroic efforts, but his identity is unknown.

The accident spurred Tucker to hand-deliver a letter to Valley Oaks management because she was highly concerned about the oak trees in the park and wanted them trimmed back more. “The area I live in is a highly congested area and it has me very, very concerned,” she said.

Within two days of Tucker’s letter, tree trimmers arrived and were diligent with their work. Tucker is extremely appreciative that management listened to her concerns. “Their cooperation has been a blessing,” she said.

While Tucker promotes oak tree trimming and continued maintenance, two other Valley Oaks tenants submitted a letter to the Village News indicating their immense disappointment regarding the unjust trimming of the 200-year-old oak in their backyard.

They wrote: “Then, one day, totally unknown to us (Why should we be informed? We just rent, we don’t own) a tree service came and destroyed the old oak. Someone decided that our oak tree needed ‘pruning.’ They hacked and sawed and great big limbs fell to the ground, right along with smaller branches.”

The authors spoke with a certified arborist following the publication of this letter. This expert indicated that their beloved oak tree was more than likely in distress before the pruning. The authors of the letter, however, instinctively feel that perhaps the excessive trimming might have facilitated the death of the tree.

Valley Oaks Mobile Home Park is a privately owned piece of land on which tenants rent spots for their coaches. Management takes pride in keeping the park pristine and safe.

“Our oak trees are trimmed on an ongoing basis; we have a lot of trees that need trimming,” said Grace Gabrielli, managing partner of Valley Oaks Mobile Home Park. For years, the facility has employed Rancho Tree Service. The owner is a certified arborist and Rancho Tree Service is a licensed business, said Gabrielli.

“We have pruned trees over the years and they have not died because of the pruning,” added Gabrielli. “We prune trees to keep them healthy.” Rancho Tree Service also prunes away any diseases attacking a tree.

After much research, Gabrielli discovered that a native mature oak should not be subject to many changes. The root protection zone (RPZ) of an oak must remain undisturbed.

Gabrielli provided a bulletin released from the California Oaks Foundation, which writes the following on RPZ: “This area, which is half again as large as the area from the trunk to the dripline, is the most critical to the oak.”

Introducing a native mature oak tree to foreign soil and planting exotic grasses, ivy and flowers like azaleas, therefore, can be harmful. In essence, foliage that requires frequent and summer irrigation should be planted outside the root protection zone.

“[Oak] are Mediterranean trees and they are used to dry months,” commented Gabrielli. “I honestly think the trees we have lost may well be suffering because people have landscaped.”

Likewise, Buchanan stated that the drought, dryness and lack of humidity have distressed a lot of trees throughout Southern California. The frost earlier in the year also killed many indigenous trees.

Gabrielli asserted that Valley Oaks management is currently following North County Fire Department safety regulations. They have met with Fire Protection Services before but recently called the organization once again after Tucker’s letter was received. The next survey date is scheduled for August 28.

“I would think that we are in compliance, but if [Fire Protection Services] finds something that we haven’t done yet, we will take care of it,” said Gabrielli.

John Buchanan recommends removing fuel beneath a tree, such as shrubs, grass and lower limbs. Branches that are in distress and/or dying should always be pruned. 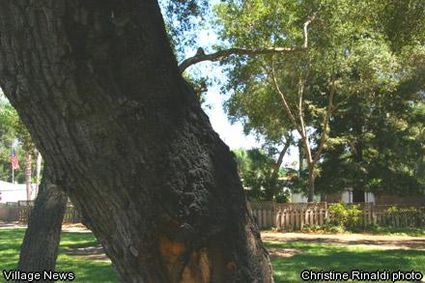 However, said Buchanan, dead leaves beneath a tree are a catch 22: “If you remove all of [the leaves] you will have problems with erosion.” Buchanan knows a lot of grove owners who shred their dead leaves and scatter them beneath the tree to help retain moisture, which prevents erosion.

“What you don’t want is six inches or more of leaves under your tree,” added Buchanan. Additionally, tree maintenance is highly important.

Valley Oaks Mobile Home Park is a very special place for Gabrielli. It has been in the family for 43 years. “I love the meandering streams and beautiful trees,” she says.

Within these beautiful surroundings, Gabrielli claims that her steadfast goal is to keep the park safe and her residents happy.