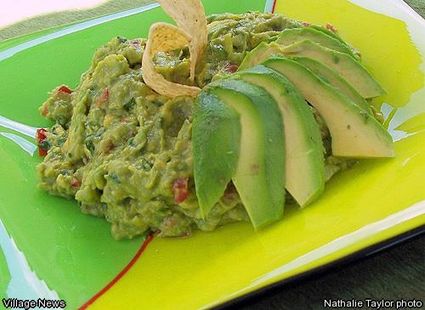 The flavor of the day was definitely avocado. It came in the form of guacamole, egg rolls, sushi, salads, pies, cupcakes, milkshakes, truffles and more. Nothing was too exotic for the imaginative cooks, chefs and bakers who participated in the culinary events at the 22nd Annual Avocado Festival held Sunday, April 20, in downtown Fallbrook.

On hand to sample some of the fare and to act as a culinary contest judge was Carol Eastman, wearing a pink jacket embroidered with “Mother of the Avocado Festival.” Other judges were community leaders such as Honorary Mayor John Harris, chefs and others with food-related careers. Cathie Ginther did a tremendous job of coordinating the culinary contests and other food events. The judges looked for excellence in taste as well as in appearance.

The competition was tough this year. I am qualified to make that statement because I was honored to serve as one of the judges and tasted every single entry. Armed with spoons, forks and even tortilla chips, I tasted my way through the maze of delicious and inventive entries.

“We live on an avocado ranch and it is second nature to make guacamole,” said Katherine. “It’s fun to do with the family.”

When asked how she felt when it was announced that they had won, Katherine replied, “I was almost in shock, but it made me feel great!”

Joe said that he was “really happy and very surprised.”

The competition was tough with thirteen entries and the judges took a great deal of time in deciding. Michael Kuyper was awarded second place honors and Laura Small took third.

Shane McSheehy, along with his wife, Rachel, and with the help of his young son Thomas, took first place in the Amateur Most Creative Avocado Dish contest with his “Avocado Egg Rolls.” Shane has been making the rolls for seven years and said that they are “always a big hit at parties.” He enjoys experimenting with different recipes and creating new ones. Shane also used chicken in the hearty and delicious rolls.

Nancy McSheehy, Shane’s mother, said that he “has always loved cooking and does a real good job.”

Mary Ann Hillery placed second in the Most Creative Avocado Dish category with her “Screaming Avocado Salad.” This salad was quite inventive, as she used mangos to enhance the flavors.

Third place winner was Nichole Tahmasian with her “Nutty Avocado Bars.” This was a sweet dessert with just enough avocado to make it interesting.

In the Professional Division, George Bamber took first with the family’s creamy and delicious “Holy Guaca-Moly.” With blue first place cards surrounding the bowl, the judges made a unanimous decision.

The competition was stiff, however, and Estrella’s Family Restaurant in Bonsall took second and La Caseta in Fallbrook took third.

Avocado cupcakes, inventive salads and sushi were just a few of the items in the Professional Division of the Most Creative Avocado Dish contest. Japanese Chef Yujiro Masuda placed first in this highly competitive division with his fresh and imaginative “Avocado Sushi.” The avocados delicately mingled with rice, citrus paper, salmon, ahi tuna, yellowtail tuna and salmon roe.

The chef also hosted a question and answer session as well as a demonstration in which audience members were able to sample the sushi. Using a press he formed the concoction, layering it with mayonnaise that he brought from Japan and then with salmon and tuna. For the audience samples he omitted the salmon roe.

This is Chef Yujiro Masuda’s third visit to the Avocado Festival. He purchases his own airline ticket and also gives complimentary sushi samples to the guests at his demonstrations. He even brings his own soy sauce to distribute with the sushi samples. A bowl of what seemed like hundreds of small plastic vials of the black substance sat on the counter.

Chef Yujiro Masuda’s interpreter mentioned that avocado is not as popular in Japan. She said that they don’t taste as good, probably because they are not Fallbrook avocados!

Second place in the Professional Most Creative Avocado Dish division was Chef Nathaniel McCoy with his “Avocado Pancotta,” a delicious and creamy dessert. Third place went to Sugar Mama’s Sweets for their “Avocado Cupcakes.” This dessert was light with a scrumptious avocado crème filling. The cupcake was topped with whipped cream.

During the day various culinary demonstrations took place. Cathie Ginther gave out samples of her Avocado Truffles, which had a creamy avocado center enveloped by chocolate. Ginther said that she was in the process of perfecting the recipe and welcomed comments. Ginther also whipped up a tasty and creamy Avocado Milkshake which included ingredients such as milk, crème of coconut and, of course, avocado. She mentioned that she puts a bit of lime in the milkshake to enhance the avocado flavor. “It livens it up,” she said. But, she also warned that one must be careful with citrus because it can also destroy the flavor.

“It’s the breakfast of champions,” as she spoke of the shake, adding that it is packed with vitamins.

Joni Wilhelm of the Lace Apron catering gave a demonstration of a dessert called Chocolate Silk Decadence. It is a raw, natural dessert with avocado, chocolate and cinnamon, among other ingredients. It all joins in a rich and tasty pudding.

Those who missed the culinary events not only missed out on scrumptious samples but missed seeing some local, and one international, chef, share a wealth of cooking secrets. Don’t dismay, however; there is always next year! 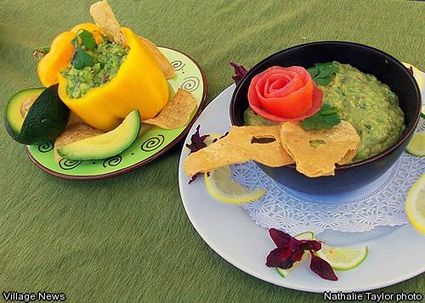