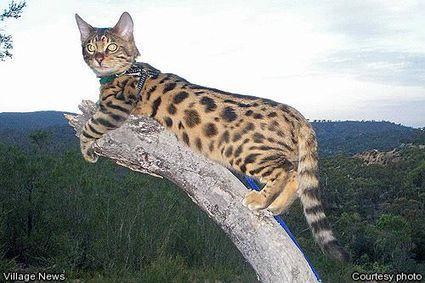 Sheba, a 2-year-old Asian Bengal cat, went missing from her home on Gopher Canyon Road in the Bonsall/Vista area in March.

Catnapping, a relaxing pastime for many Fallbrook residents, took on a new meaning recently when officers from the San Diego County Sheriff’s Department became aware that a local man was holding a cat for ransom.

Implanted with a microchip for identification purposes, Sheba spent a minimal amount of time outdoors, residing indoors the majority of the time.

Shortly after her disappearance, Sheba’s owners discovered her collar on the driveway leading to their home. They immediately called the microchip identification service they had used and reported her missing. After that, the owners posted signs offering a reward for her recovery.

Officers say what appears to have happened is that the cat was removed from the neighborhood by a Fallbrook man and taken to a veterinarian’s office (or other entity), where he had the cat’s microchip scanned for information.

“The suspect obtained the owner’s information and then called the owner and essentially held it for ransom,” said Sgt. Theresa Adams-Hydar of the Fallbrook Sheriff’s Substation.

Asian Bengal cats like Sheba, reminiscent of the Asian leopard cat, have a reported value of approximately $2,000.

On June 12, the cat thief left a phone message for Sheba’s owner, saying, “I have something of yours.”

“He left a return

number and [the owner] heard a cat meowing in the background,” Adams-Hydar reported.

Sheba’s owner called the man back right away. “The first thing he said to her was, ‘I’ve got your cat; what’s the reward?” Adams-Hydar said.

The cat’s owner offered the man a $100 reward, although no amount was listed on the signs she had posted. Adams-Hydar said the man told Sheba’s owner, “That’s not going to work; I guess you don’t want your cat back.”

It was at that point that the woman used the Internet to do a search of the man’s phone number and discovered he lived near Live Oak Park. She contacted the Fallbrook Sheriff’s Substation for help.

“[The cat owner] called us and we tried to get the suspect to relinquish the cat to its rightful owner; he refused,” Adams-Hydar said. “When [the suspect] told us to ‘pound sand,’ Deputy Mike Tingley and Detective Jeff Lauhon wrote a search warrant and retrieved the stolen cat on June 17.”

Arrested in the catnapping caper was 46-year-old John Feucht. He was charged with two counts: the theft of an animal for sale or misuse and receiving stolen property.

“[Feucht] basically thought he wasn’t doing anything wrong; he maintained that cats are property, not domesticated animals,” Adams-Hydar said. “He knew it was her cat.”

Regardless of Feucht’s opinion, he will face the charges in court.

“These are felony charges and his sentence will be contingent on his history,” Adams-Hydar said. “He could be imprisoned for up to one year.”

After spending approximately two hours in the Sheriff’s station after her recovery, Sheba was reunited with her rightful owner.