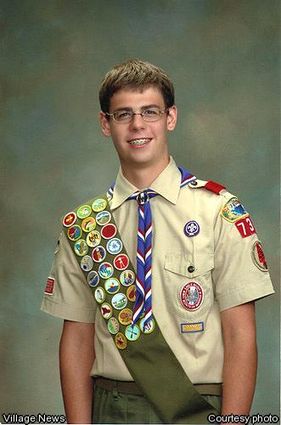 Alex Lemke displays the 27 merit badges he earned on his way to his Eagle Scout Badge.

On June 1 Alex Lemke, 15, was presented his Eagle Scout Badge, which he officially earned on February 19.

Alex’s Court of Honor was held at Riverview Church in Bonsall, where Alex performed his Eagle project, a large shade cloth canopy over the playground. Approximately 110 people attended the ceremony.

Eagle is the Boy Scouts of America’s highest rank. Less than four of every 100 boys receive the Eagle rank because of the rigorous requirements.

Among the requirements for Eagle are: earn a total of 21 merit badges, 12 mandatory and nine elective; plan and lead a significant project t...