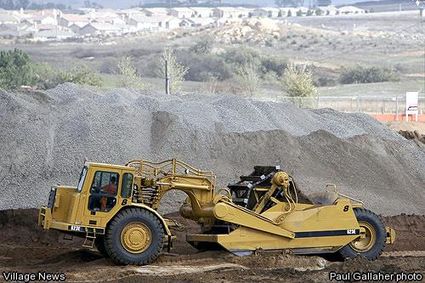 Bulldozers and tractors can be seen tearing up 50 acres at the northeast corner of Antelope and Baxter Roads in Murrieta.

In two years, the construction equipment will be replaced with finer tools, such as CAT scans, scalpels and microscopes, inside the new Loma Linda University Medical Center – Murrieta.

“I’ll see you in about two years when we cut that ribbon and the first patient comes in,” said Murrieta Councilman Rick Gibbs to a crowd of doctors, nurses and school and city officials during a groundbreaking ceremony on Dec. 8.

The first phase of the teaching and research hospital is expected to open in January 2011.

The hospital will have 106 beds, including six state-of-the-art surgical suites, a surgery center, an imaging center, emergency room and areas of medical specialties.

Dr. John Piconi, a driving force in the construction of the new hospital, said the city helped push the project through with little delay.

“This community was thirsty to get this done,” he said on Dec. 8.

The second phase of the hospital would add another 114 beds and is expected to open two years after the first.

The medical campus will include a $45 million, 160,000-square-foot medical building which will also open in January 2011.

Plans for a hospital started in 2004, when a group of local doctors started talking to Loma Linda University Medical Center about expanding into underserved areas of the Inland area.

Riverside County health officials have said in the past that the area has one bed for every 1,000 persons. That number is much lower than the national average at one to 370 people.

The department has said that the county needs bout 1,400 more beds to keep up with growth.

The 70-member group partnered with the medical center and Surgical Development Partners, a Nashville-based company. Each partner will have a 45-percent stake in the facility with the Tennessee company having a 10-percent stake.

The group put together an economic study showing that it will bring in about 700 new jobs with a payroll of $42.5 million.

For Murrieta, the hospital is expected to help launch a new business corridor along Antelope Road.

The city has already heavily invested in upgrading the roads and interchanges in the intermediate area and is also working with the county and state to widen I-215 and build a new interchange at Keller Road.

“[The medical campus] will serve as an anchor for driving the construction of corporate parks and technology centers along the I-215 corridor,” said Murrieta Mayor Gary Thomasian.