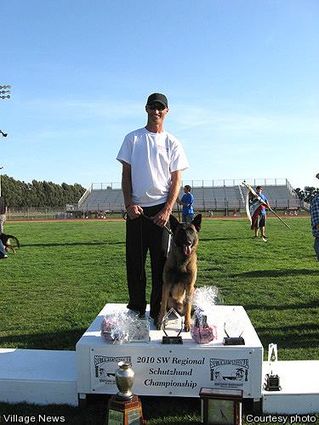 FALLBROOK – David Greene and his Belgian Malinois, Luigi du Dantero, won the 2010 Southwest Region Schutzhund III Championships. They defended their 2009 championship title in Ventura during the weekend of March 27-28.

This win distinguishes Luigi for the second year in a row as the top dog in his field throughout California, Southern Nevada and Arizona. Schutzhund, a German dog sport, entails advanced levels of protection, flashy off-leash obedience, and scent-tracking with up to 800 human footsteps.

Greene, a Fallbrook resident, has been commended with two consecutive “Handler Owned and Trained” awards recognizing his accomplishments and talents in personally training and showing Luigi.

Greene said Luigi “embodies the traits of intelligence and speed which make an excellent working dog.”

“Winning this championship a second time around was a huge accomplishment,” said Greene, adding it was also an emotional one. “I also competed in memory of my close friend and training director, Tom Riche, who died suddenly last December of a heart attack. It was because of Tom that Luigi and I got so far in this sport.”

In October, Greene and Luigi will compete at the Nationals in Pennsylvania. It’s Greene’s hope that he and his dog will score high enough to represent the United States in the World Team.