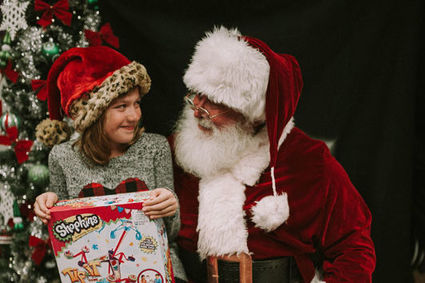 At the Boys & Girls Clubs Ingold Unit, Sarah visits with Santa and accepts a present from him on Dec. 9.

Santa’s in the middle of finalizing his list of good boys and girls, and as a way to double check everyone’s wish list, he swung by the Boys & Girls Clubs of North County’s Ingold Unit on Dec. 9, surprising over 120 children as they played.

Santa drove up in his back-up vehicle, a white pickup filled with presents and Christmas lights, as the reindeer were practicing take offs for the big night. As children played, Santa’s assistants and Boys & Girls Club employees transformed one of the offices into his living room so he could chat with each child, and give them an opportunity to tell him what he wanted for Christmas.

Santa’s main elf on site, Rose Brown-Salek, helped secretly coordinate the visit with the Boys & Girls Club, as she and her son, Matthew Salek, have personal connections to the man in red.

“Before, [Matthew’s] dad used to have Santa visit, but he was killed in a motorcycle accident two years ago,” said Brown-Salek. “I’ve helped Santa surprise with visits since then. Once he came caroling with us, another time we caught him sleeping on our couch after caroling.”

Brown-Salek felt that she could help Santa spread holiday cheer by giving him an opportunity to speak with more Fallbrook children, which made the Boys & Girls Club the ideal location for the meet and greet.

“It took three carloads to get the stuff over,” she said. “All 120-plus kids got to sit on Santa’s lap and experience Santa magic. In Santa’s special living room, children got to pull on his beard to make sure it was real, then he explained to all the kids where his sleigh is.”

As they waited their turn, children were also able to pick out accessories to wear in a photo taken with Santa before telling him what was on their Christmas list. Some families took advantage of Santa being in town and arranged for family portraits with him. The children’s discussions with Santa were everything from hilarious to heartbreakingly sweet.

“Some of these kids have never even sat on a mall Santa’s lap," said Brown-Salek. "One looked at Santa, examined his face, and said, ‘You don’t look like a mall Santa.’ One girl told Santa that all she wanted for Christmas was presents for her younger brother and sister, and a Christmas dinner for her family.”

As a special treat for the Boys & Girls Club employees, Brown-Salek was able to have local company Lil’s Kitchen provide some famous lemon bars as a small token of thanks.

“They work until 6 p.m. so parents can work," said Brown-Salek. “The Boys & Girls club is not just a place to go play. Children are picked up, and do supervised homework. They are provided a snack from the club. Kids learn social interactions, and learn how to compromise. There are so many things that these kids get exposed to.”

Brown-Salek encourages folks to remember all of the hard work the Boys & Girls Clubs of North County does for the future, especially as they look for a worthy cause to donate funds to. 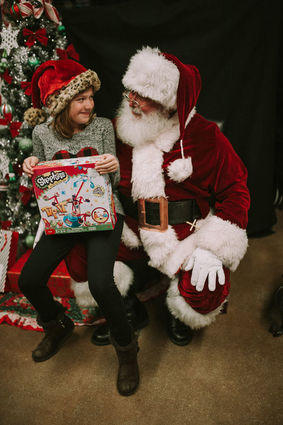 At the Boys & Girls Clubs Ingold Unit, Sarah visits with Santa and accepts a present from him on Dec. 9. Photos by Neka Rae photography

“I really hope to open everybody’s eyes,” she said. “The kids here are not just underprivileged kids; they are kids from all nationalities, all grades, all socioeconomic backgrounds, and all neighborhoods. They are our future, and the Boys & Girls Club gives these kids an opportunity to be successful and well-socialized. So many don’t know that we even have a Boys & Girls Club, or what they do.”

While Santa’s visit to the Club may be over, Brown-Salek has already confirmed that he will be back next year.

“We have started a new annual tradition,” she said. “It’s exciting!”

The Boys & Girls Clubs of North County offer after school care for children of all ages across Fallbrook. For more information, go to http://www.bgcnorthcounty.com.