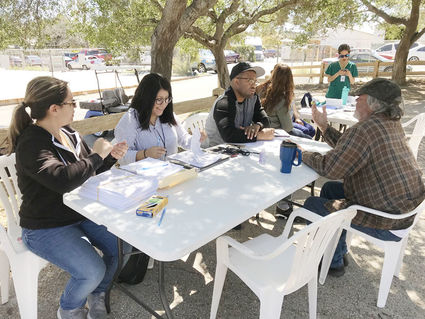 A count of the homeless conducted throughout San Diego County Jan. 26 revealed that Fallbrook had at least 25 people living on – or under – the streets or in vehicles.

"There may be some problems with the count in the sense that we did a 6 a.m. to 8 a.m. count and by that time they're up and moving," said Brad Fox, a 30-year Fallbrook resident who has taken up the cause of helping the homeless in the Friendly Village. "In other parts of the county they do a 4 a.m. to 6 a.m. count."

Fox and eight fellow church members from SonRise Christian Fellowship, along with members of another group called Fallbrook Homeless Advocacy, are spearheading a campaign to get the local homeless help so they can then help themselves.

"It's kind of a justice mission where we're helping people rehabilitate their lives – not just maintain their lives the way it is, but to help improve their lives, give them a new vision of themselves, a new improvement of self esteem," said Fox.

Fox has been consistently contacting county officials about getting more assistance for the homeless of Fallbrook and March 29 a "Homeless Outreach Event" was held at Jackie Heyneman Park from 11 a.m. to 2 p.m.

Jackie Heyneman Park has been a popular hangout spot for the homeless and the outreach event was promoted via notices posted on park benches. Ironically, the notices may have scared off some of the people targeted as the park – which during the daytime can be occupied by more than a dozen homeless individuals – was visited by only a handful March 29.

The homeless that did attend were offered the opportunity to get a hepatitis A shot from Robin Anderson, a public health nurse with the county. Chasity Gorbea, a human services specialist with the county, was there to let the individuals know what kind of benefits they may be eligible for, including Medical, CalFresh (California food stamps) or General Relief, a county-funded, cash-based program for individuals in poverty.

Dexter Egleston with Interfaith Community Services conducted housing assessments, and officials from the McAlister Institute provided information on drug and alcohol rehabilitation services. Deputies from the Sheriff's Fallbrook substation were also in attendance for open discussion.

Anderson reported that the county has administered more than 100,000 hepatitis A vaccinations during the past several months due to the crisis with the virus.

"We've been all over," said Anderson, who at the Fallbrook event gave a man named Terry his second shot. "Now he's fully immune."

Egleston said he frequently comes to Fallbrook to check in on clients that Interfaith Community Services have housed in local hotels.

"They are temporarily being lodged at one of the hotels and we are providing services to connect them to resources in our community as well as permanent housing interventions," said Egleston. "We've stopped taking in new clients for the voucher program, however, we're still providing outreach to connect these clients to permanent housing interventions."

Egleston interviews the homeless to determine what type of housing help they may qualify for.

"All homeless clients are qualified to be assessed and sent in a certain direction depending on what level they qualify for, depending if it's wraparound housing or permanent supportive housing," said Egleston. "We'll talk to a client and understand what their situation is and do an initial assessment, putting them in our coordinated entry system. And then they'll be matched to a housing provider in the county of San Diego."

Jackie Heyneman came to the park named in her honor to participate in the homeless outreach event.

"My purpose for being here today is to hopefully encourage the county to provide some help to us," said Heyneman. "I'm hoping something comes of this."

Heyneman complimented Fox and the other community members working on the homeless situation in Fallbrook, noting that they have been researching homeless programs throughout the county to find out what might work locally.

"There are a lot of people involved in making this happen," said Heyneman. "Some real sincere effort has gone into this as well as and seeking information from other groups that have been successful. That's part of the learning process to know what to do."

One homeless person well known in Fallbrook is Dave Pepper, who used to be a fixture sitting on a chair in front of the Graybill Medical Group offices on South Main Avenue. According to Fox, Pepper is now receiving help. 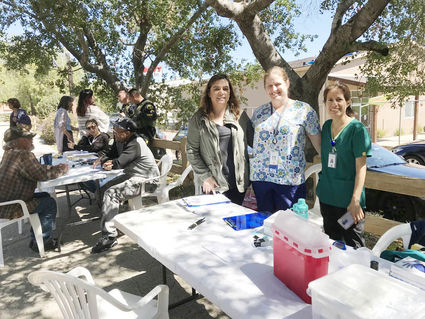 Ivonne Sotelo, left, a social services aide for the County of San Diego, and public health nurses Robin Anderson and Adalis Arrieta are ready to provide services at Jackie Heyneman Park during a homeless outreach event.

"I understand he's been voluntarily committed to a mental health care institution in North County," said Fox. "He's been housed and getting training and medical care. Dave is brain damaged – he told me that himself – and he's got learning disabilities. He's a good guy and he's being taken care of. He was our poster boy for homelessness in Fallbrook because he was in the worst shape. Even the homeless people feel sorry for him."

Terry said he has been on the streets "on and off for seven years."

"Me and my wife split up," said Terry in explaining how he ended up homeless. "I gave her all the money, I gave her the car and I gave the daughter. I sent her money and I sent her money. Then my unemployment ran out."

Terry, who took a quick swig of something offered by a friend, was asked if he saw any way out of the situation he was currently in.

"Well, it's either a lotto ticket or a bullet," said Terry, who then waited a few moments before adding, "seriously, the only way is to keep the faith. That's it. You have to have the faith and the hope."

Fox and others like him work to provide that hope.