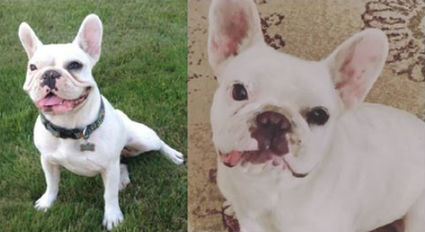 The San Diego County Sheriff's Department's Fallbrook Substation is asking for help in locating Rosie, a French Bulldog, who is suspected of being stolen from her residence in late February.

FALLBROOK - The Fallbrook Substation of the San Diego County Sheriff's Department issued a notice on Thursday, March 7 via social media requesting the public's help in locating the whereabouts of Rosie, a French Bulldog, that went missing from a Fallbrook residence on Feb. 22.

The dog's owners and the Sheriff's Department suspects the dog may have been stolen, possibly by a Hispanic couple driving a silver sedan that appeared to be attempting to steal the dog a day earlier before being chased off by a witness.

Rosie weighs 21 lbs. is all white with dark markings around her left eye. She was last seen wearing a teal colored collar with a bone-shaped tag.

If you can help locate Rosie or identify her suspected thieves, please contact Detective Ashkar at the Fallbrook Sheriff's Station located at 388 E. Alvarado, in Fallbrook or by calling (760) 451-3100.