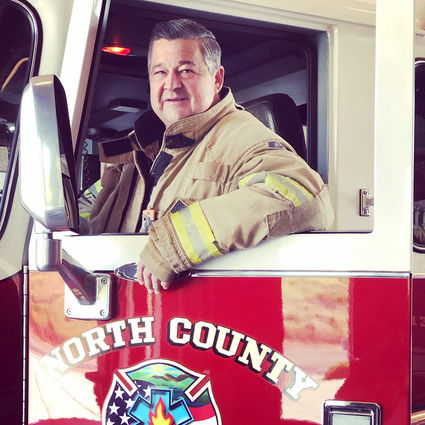 The sudden loss of Stormy McInerny, June 27, 2019, has left many in shock and heartbroken. Stormy was born in Fremont, California on September 23, 1964. He grew up on an avocado ranch in Bonsall after his parents moved from Carlsbad to “the country” in 1974.

He attended Bonsall schools and graduated from Fallbrook High in 1982. After graduation, he worked in retail and construction before starting his own pool cleaning business.

Stormy was hired as a reserve firefighter by North County Fire Protection District in 1987 and as a full-time Firefighter/EMT in 1988. He met his wife Gina (Stockton) in 1989 and they married in 1992. Stormy graduated from one of the first paramedic programs offered by Palomar College in 1993.

On his non-duty days, Stormy was a paramedic instructor at Palomar College where he taught hundreds of aspiring EMTs and medics and precepted numerous probationary paramedic interns for North County Fire.

In 2008, Stormy promoted to Engineer/medic, a position he held until his retirement just three short weeks ago. For 32 years, Stormy proudly served and protected the communities of Fallbrook, Bonsall, and Rainbow and fought devastating wildfires throughout the County of San Diego and the State of California.

Since 2013, Stormy was also a familiar face at the McInerny family store in Bonsall.

From his earliest days, Stormy took an interest in most anything with an engine and wheels. He enjoyed motocross, off-road racing, and loved spending time in Baja with friends and family.

Services will be held Saturday, July 6, 2019. In memory of Stormy, and in lieu of flowers, the family requests donations to the California Fire Foundation (www.gofundme.com). The foundation provides emotional and financial assistance to families of fallen firefighters, firefighters, and the communities they protect.