Fire breaks out in field behind Albertsons on Ammunition Road 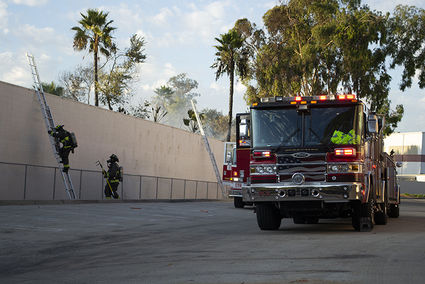 The North County Fire Protection District, along with firefighters from Oceanside, Vista and Pala, responded to a brush fire near Ammunition Road in Fallbrook on Saturday.

A fire scorched an open field and damaged a business Saturday afternoon near Ammunition Road in Fallbrook before firefighters were able to get it under control.

The fire was first reported at 4:33 p.m. in a field behind the Albertsons on Ammunition just west of Mission Road, according to North County Fire Protection District spokesman John Choi.

Fire crews were on scene quickly. Choi initially said the blaze had a slow rate of spread but had started to burn a nearby building.

One business, Falcor Inc. at 447 Ammunition Road Unit E, was damaged by the fire, but crews were able to prevent the...