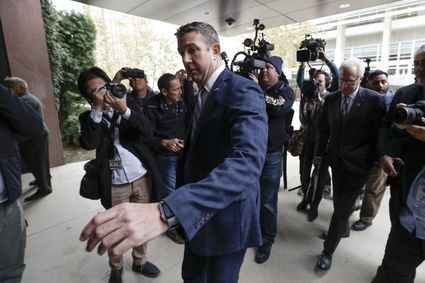 California Republican Rep. Duncan Hunter reaches to open the door to federal court Tuesday, Dec. 3, 2019, in San Diego. Hunter said in a TV interview that aired Monday he plans to plead guilty to the misuse of campaign funds at a federal court hearing Tuesday in San Diego. (AP Photo/Gregory Bull)

SAN DIEGO (AP) – California Rep. Duncan Hunter gave up his yearlong fight against federal corruption charges and pleaded guilty Tuesday, Dec. 3, to misusing his campaign funds, paving the way for the six-term Republican to step down.

Hunter changed his not guilty plea at a federal hearing in San Diego Tuesday in a dramatic reversal.

For more than a year, Hunter had insisted that criminal charges against him and his wife were the result of a conspiracy of the "deep state" meant to drive him from office in the Democrat-dominated state.