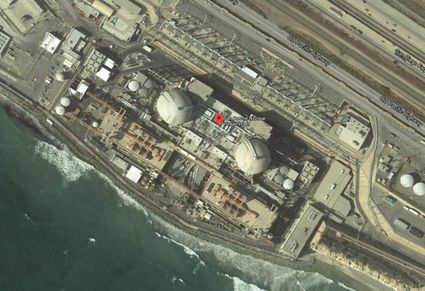 SAN DIEGO (CNS) - As Southern California Edison begins its eight-year-long process of decommissioning and dismantling the San Onofre Nuclear Generating Station, a local watchdog group has filed a petition to put a halt to actions at the seaside plant.

Public Watchdogs, a nonprofit advocacy group, claims that if the facility is flooded with rain or ocean water, the proposed method of disposing nuclear waste could lead to explosive radioactive steam geysers. It is asking for a detailed look into disaster-proofing the site while it still has radioactive materials present.

The utility sent out notices a week ago to residents within five miles of the plant that it would begin initial work on the demolition. San Onofre hasn't produced power since a steam leak in 2012, and SCE closed the plant the following year and began decommissioning activities.

The nuclear waste is being stored self-cooling canisters which take in cool air and expel hot air. The nuclear waste can reach temperatures of up to 452 degrees, according to Public Watchdog, which fears that the thermal shock of cold ocean water could cause a rupture in the canisters.

Edison, however, flat out rejected the allegation.

"The Public Watchdogs' documents contain multiple errors,'' according to an SCE statement. "For instance, the outside shell of the warmest spent fuel storage canister on site is approximately 225 degrees, not an average of 452 degrees. This one fact alone undercuts the entire `geyser' narrative. Water is a better conductor of heat than air and actually would serve to more efficiently cool the canisters.''

Edison insisted that it "continues to safely store spent nuclear fuel on site, and will do so until the federal government licenses and off-site facility that the fuel can be moved to.''

When the California Coastal Commission voted 9-0 last October to allow SCE to begin dismantling the plant, the canisters were being moved from a "wet storage'' facility to a newly constructed "dry storage'' facility on the site. San Onofre is located on 85 acres of the Camp Pendleton Marine Corps base and is home to 3.55 million pounds of spent nuclear fuel, the San Diego Union Tribune reported last year.

The vote to dismantle the facility came with its own set of disputes, as there is no permanent federal site for nuclear waste, allowing it to pile up at facilities such as San Onofre.

Public Watchdogs claim the risk of having the waste sitting at the site within a short distance of millions of people is a disaster waiting to happen.

Charles Langley, executive director of the advocacy group, pulled no punches in his letter to Margaret Doane, head of the U.S. Nuclear Regulatory Commission.

"This petition identifies possibly the most significant man-made engineering disaster of the century, exceeding such disasters as Chernobyl, Fukushima, Bhopal, Exxon Valdez, and the Deepwater Horizon oil expulsion,'' he wrote.

In its statement, Edison encouraged "people in our local communities to take a tour at the site and see if for themselves, or learn more about spent nuclear fuel storage at San Onofre by visiting our website, http://www.SONGScommunity.com.''

The costs of deconstruction come from $4.4 billion in existing trust funds for that purpose collected over years from Edison's customers and from trust investments.