Gillcrist named salutatorian for 2019-2020 at FUHS 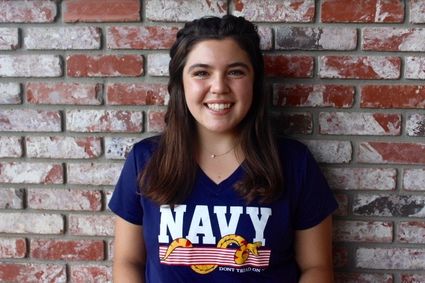 Due to the coronavirus outbreak and stay-at-home orders, Fallbrook High School Principal Narciso Iglesias informed the valedictorian and salutatorian for the 2019-2020 school year that they had earned their statuses in a Google Hangout call with the students and their parents Friday, April 17.

Emiliano Corona, whom the Village News profiled last week, was named valedictorian and Audrey Gillcrist is the salutatorian.

For Gillcrist, it is a unique time, but she's grateful for the recognition.

"It is definitely an unprecedented time and there's a lot of uncertainty, but I feel really privileged because I know a lot of students who also work incredibly hard during their four years of high school and even before that," she said in a phone interview. "And they're not necessarily getting that recognition. I feel very privileged to be recognized in this way."

In a statement released by Iglesias, he raved about the two students.

"Both these students are super deserving, they are hard-working, studious beyond words and just great, awesome humble human beings," Iglesias said. "I am so proud of them and their families have just been part of every aspect of our community and always 100% supportive."

Gillcrist echoed that sentiment when asked who had contributed to her success academically.

"First and foremost, my parents and my family," she said. "I am incredibly blessed. I have an amazing support network, and I am very privileged to just be able to rely on them through thick and thin. My mom and my dad, my siblings Madeline and Luke, were always there for me to call in a favor or just general support. They're my touchstone. They keep me grounded, don't let me get too big of a head, so that's always good."

Gillcrist was quick to point out that her time at Fallbrook High was positive from every angle.

"I had an incredible experience just going to Fallbrook High for my four years," she said. "I think there are a lot of misconceptions about a Fallbrook High if you speak to people who don't go there or aren't necessarily familiar with a lot of the teachers or administration there. The teachers that I had during my four years cared about their students in a way that I don't think many other places really have. Speaking with friends and peers who go to different high schools, there's definitely a unique sense of community at Fallbrook High."

Gillcrist said despite all the changes in the administration, she always felt supported.

"I think I've had three principals and one interim," she said. "So really the constant leadership that I had throughout my four years would be my two ROTC instructors. My two math teachers, Mr. Lenaway and Ms. Berg, they both just provided an immense amount of support."

Gillcrist told a story of taking geometry class during the summer leading into her sophomore year. She lost both of her grandparents just before that and was dealing with some adversity.

"Ms. Berg and Mr. Lenaway were just always there to provide help," she said. "They form relationships with the students and care for them beyond the classroom, so that's really cool."

Gillcrist said another indication of how those teachers support students was when Berg stepped up to be an on-campus coach for the varsity girls' field hockey team last fall.

"We didn't really have an on-campus presence and we were really hurting in that way, and she just stepped up and we ended up winning the CIF championship," Gillcrist said. "That just comes to mind is as one of my favorite memories from my high school experience. Just knowing that these teachers, they are explaining the material to us, but they're also teaching us life lessons that go far beyond the four walls of the classrooms that we used to sit in every day."

Gillcrist, who grew up in Fallbrook since the age of 3, is planning to attend the United States Naval Academy to study mechanical or space engineering. She said one day she hopes to be a pilot in the Marine Corps.

There is still some uncertainty as to how seniors like Gillcrist will end their senior year. Graduation plans are up in the air and that loss weighs on her to a certain extent.

"I guess I am closing this chapter of my life and I feel like I have some, not unfinished business, but I had this like the preconceived idea of what (senior year) would look like and what grad night would look like or playing my last lacrosse game would look like," she said. "And a lot of those ideas are just not coming to fruition. Frankly, there's kind of a sense of loss. Bittersweet would be a really good way of describing it.

"I'm thankful for all the wonderful memories that I did make during my first semester and part of the second-semester senior year. But it's like, wow, I had eight semesters and when this could have occurred. It just happened to be during the one semester that, in my mind, I was looking forward to the most," Gillchrist said.