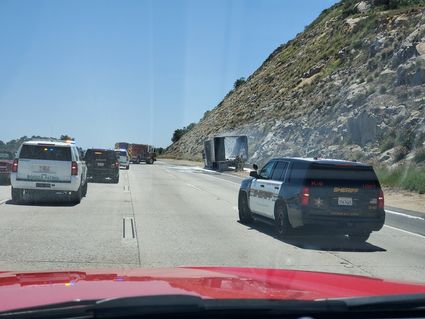 A big rig fire shut down lanes of southbound Interstate 15 near Fallbrook Monday afternoon, May 4, a fire official said.

It all began a little before 1:25 p.m., when the big rig's driver realized a rear tire was on fire and pulled over on southbound I-15 just north of Mission Road, according to North County Fire Department Capt. John Choi.

After the rig came to a stop, the entire trailer became engulfed in flames.

The driver was able to safely exit the rig, and North County fire crews arrived to put out the blaze, which extended into nearby vegetation before being contained at 1:47 p.m., Ch...