Demonstration was entirely peaceful, a day after a tense standoff in Temecula between deputies and protesters 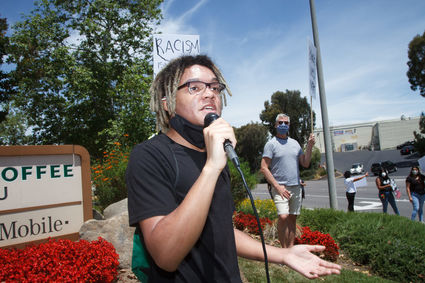 A few dozen protesters turned out May 30 to the corner of Mission and Ammunition roads in Fallbrook to show solidarity with George Floyd - the black man who died May 25 after a white Minneapolis police officer knelt on his neck for more than eight minutes - and the rest of the Black Lives Matter movement.

The demonstration came one day after a larger protest in Temecula turned into a tense standoff with sheriff's deputies once the Riverside County Sheriff's Department declared the protest to be an "unlawful assembly." It was also the morning after buildings burned in La Mesa, Los Angeles an...