US economic downturn eases in June as lockdowns lift 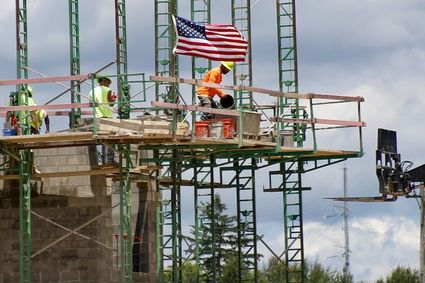 In this June 11, 2020, file photo, workers on scaffolding lay blocks on one of the larger buildings at a development site where various residential units and commercial sites are under construction in Cranberry Township, Butler County, Pennsylvania. AP photo/Keith Srakocic, file photo

Business activity in the United States, as measured by purchasing managers index data, hit a four-month high, reflecting the lifting of lockdowns and fueling hopes the economy is roaring back to life.

IHS Markit, which released its PMI numbers Tuesday, June 23, said all four measures of U.S. business activity that it tracks showed a significant rebound in June. Despite contracting for a fifth straight month, the pace of decline of business activity eased substantially and above expectations, supporting the view that the pandemic-driven recession is drawing to an end.

Chris Williamson, chief business economist at IHS Markit, said the data "showed the U.S. economic downturn abating markedly in June," adding that "the improvement will fuel hopes that the economy can return to growth in the third quarter."

The flash composite output index, which tracks both the manufacturing and services sectors, rose to a reading of 46.8 last month from 37 in May. A reading below 50 indicates contraction in private-sector output.

While still in contraction territory, the decrease in the composite index was the softest since February, before the COVID-19 outbreak hit.

"As more firms and states began to reopen following the coronavirus disease 2019 outbreak, offsetting weak demand faced by many other companies, the overall pace of decline eased among goods producers and service providers," IHS Markit said.

The PMI for the services sector, which accounts for some two-thirds of the U.S. economy, rose to 46.7 in June from 37.5 in the prior month.

Manufacturing was the surprising bright spot, with the contraction in activity coming in above expectations. The flash manufacturing PMI rose to 49.6 from a reading of 39.8 in May. Economists polled by Reuters forecast the index for the sector, which accounts for 11% of the economy, rising to 47.8 in June. The manufacturing output index rose to 47.8 from 34.4 in May.

IHS Markit attributed "the marked softening in the pace of overall decline" in manufacturing activity to substantially slower falls in output and new orders.

Williamson said threats to economic recovery rest chiefly in the possibility of a second wave of COVID-19 outbreaks, along with depressed demand associated with high unemployment and concerns about the future.

"Any return to growth will be prone to losing momentum due to persistent weak demand for many goods and services, linked in turn to ongoing social distancing, high unemployment and uncertainty about the outlook, curbing spending by businesses and households," Williamson said.

"The recovery could also be derailed by new waves of virus infections," he said, adding that "continual vigilance by the Fed, U.S. Treasury and health authorities will therefore be required to keep any recovery on track."

A separate report from the U.S. Commerce Department showed sales of new homes jumped by 16.6% in May, far better than the 2.9% consensus.

Reprinted with permission of The Epoch Times.