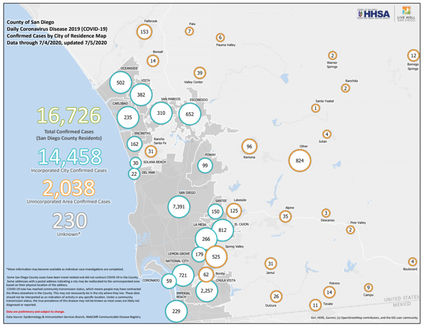 SAN DIEGO (CNS) - With the county now on the state's coronavirus watch list thanks to the rising rate of positive cases, Gov. Gavin Newsom said Monday he anticipates local health officials acting shortly to comply with recently enacted ordered, including the closure of indoor dining spaces.

The county was officially added to the state's monitoring list -- which now includes 23 counties across the state -- over the weekend, primarily due to the region's rising rate of cases per 100,000 residents.

Ahead of the Fourth of July weekend, Newsom ordered counties that have been on the list for at least three days to shutter indoor operations at businesses such as restaurants, wineries, movie theaters, zoos, museums and cardrooms.

On Monday, Newsom noted the addition of San Diego and several other counties to the state's monitoring list, and said he is awaiting an order from local health officials in each of those counties to issue an order enacting the measures, which are expected to remain in effect for at least three weeks.

Counties on the list were also ordered to close all of its bars, a move San Diego County had already taken ahead of the holiday weekend. The county issued a 10 p.m. curfew for restaurants.

There were no deaths reported Saturday or Sunday and the region's total remains at 387, health officials said.

The county's 14-day average of daily positive tests is 5.6%.

Two new community outbreaks were reported Friday and one on Saturday. All three were restaurants.