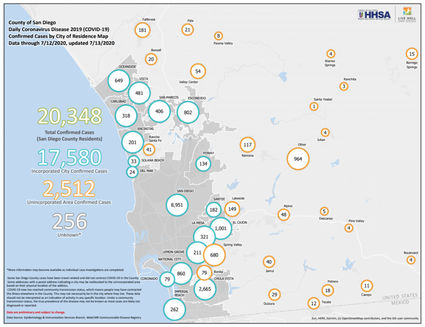 Of the 14 deaths, six were women and eight men. They died between July 2 and July 13 and ranged in age from mid-40s to late 80s. All but one had underlying medical conditions.

A community setting outbreak is defined as three or more COVID-19 cases in a setting and in people of different households.

Additionally, the smoke from the fire on the USS Bonhomme Richard at Naval Base San Diego could cause potential health problems for those most susceptible to COVID-19, including the elderly and those with heart or lung conditions, health officials said. Supervisor Nathan Fletcher asked residents who smell smoke or experience eye irritation to remain indoors with doors and

Nick Macchione, San Diego County's director of the Health and Human Services Agency, offered more bad news Monday when he reported the county's COVID-19 testing capacity was stretched to its limit. Local biotechnology company Helix did announce a partnership with the county to provide 2,000 tests a day with a 24-hour turnaround for the foreseeable future, but supplies both locally and nationally remain critically low.

``I'll be clear and frank, it's not a testing windfall,'' Macchione said of the partnership.

Although the county has averaged more than 8,000 tests per day over the last week, a shortage in testing supplies has stretched supply lines to the limit, County Supervisor Greg Cox said Monday.

Before the partnership with Helix, Macchione said the county was seriously considering doing what some other jurisdictions in the country have done and close state- or county-run testing sites to better consolidate resources. For now, the county can keep all testing sites open and honor all existing appointments for tests, but both Macchione and San Diego County Public Health Officer Dr. Wilma Wooten explained that officials would shift testing priorities back to those showing symptoms and those most at risk for the illness -- including the elderly, first responders and those with underlying health conditions.

``The pandemic is not over,'' Wooten reminded county residents last week. ``The disease is still widespread in our community, as evidenced by the rising cases.''