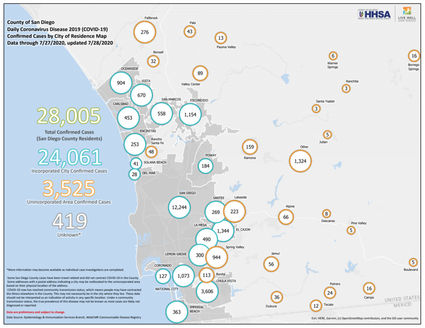 Of the deaths, six were women and eight were men, ranging in age from their early 60s to late 90s, and died between July 17-26. All had underlying medical conditions.

Of the 6,623 tests recorded Tuesday, 8% returned positive. The 14-day average is 5.7% and the state's target is below 8% to minimize the spread of the illness.

Eight new community setting outbreaks were reported Tuesday -- five in restaurant/bar settings, one in a gym, one in a nail salon and one in a residence. In the past seven days, 20 community outbreaks have been confirmed.

The number of community outbreaks is above the county's goal of fewer than seven in a seven day span. A community setting outbreak is defined as three or more COVID-19 cases in a setting and in people of different households.

On Monday, the county reported 529 people were hospitalized related to the coronavirus -- a high for the month of July -- and health officials expressed concern about a weekend outdoor church service that attracted scores of unmasked worshippers.

``It really was a massive group of people gathering together without social distancing and without wearing facial coverings,'' Wooten said. ``We will continue to address this egregious violation as we have the others that have been brought to our attention.''

Gov. Gavin Newsom ordered the re-closure of churches in much of the state about two weeks ago amid a spike in the number of coronavirus cases. Outdoor worship services are still permitted, though attendees are required to wear face coverings and stay six feet apart.

``If people continue to show or implement behavior in terms of gathering and not wearing face coverings and not social distancing, it is quite possible we will not get off the list,'' Wooten said.

As a result of numbers that continue to rise, Supervisor Greg Cox announced last Wednesday that San Diego County was initiating a Safe Reopening Compliance Team that will focus on businesses and residents not in compliance with public health orders.

``This is a carrot approach, not a stick,'' Cox said. ``But we still have the stick and other tools to ensure compliance.''

Cox said city officials hope to have a plan approved by next Tuesday with specifics on how the team will operate.

Supervisor Nathan Fletcher said the team would enable the county to step up enforcement against ``egregious violations,'' but details regarding that enforcement were not immediately available. Officials were reaching out to the various cities and communities in the county to collaborate on solutions.