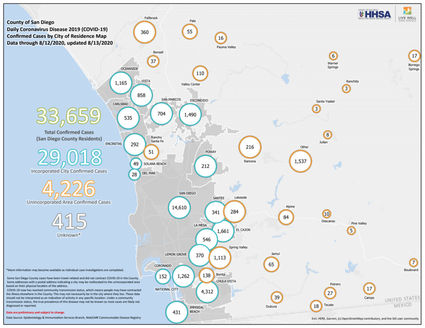 SAN DIEGO (CNS) - For the second day in a row, San Diego County public health officials reported a case rate of fewer than 100 positive COVID-19 tests per 100,000 people, indicating things may be improving locally with regard to the pandemic.

If the case rate -- which was 96.5 per 100,000 people on Thursday, Aug. 13 -- stays below 100 on Friday, the county will officially be off the state's monitoring list. After an additional 14 consecutive days below that number, some schools with students in grades 7-12 could potentially reopen for in-person teaching, depending on individual school district metrics.

Theoretically, if current trends continue, students could be in school by Aug. 28.

Additionally, 48 elementary schools have filed waivers with the county to return to school early.

``We are seeing progress, but we are in the middle of a marathon, not a sprint to the finish line right in front of us,'' he said Thursday. ``Our goal is not just to have the rate of cases fall below 100 per 100,000, but to keep it there.''

State mandates on which businesses are allowed to have indoor operations would not change, Fletcher said, until the county gets more information from Gov. Gavin Newsom's office. No other businesses can reopen after the 17 days unless the state provides further guidance.

Of the deaths reported thus far during the pandemic, 96% had some underlying medical condition. According to Dr. Wilma Wooten, the county's public health officer, the leading underlying causes which helped contribute to death were hypertension, diabetes, heart disease, dementia/Alzheimers and chronic kidney disease.

Of the 8,020 tests reported Thursday, 3% returned positive, lowering the 14-day positive testing rate to 4.6%, well below the state's target of 8% or fewer. The 7-day rolling average of tests is 7,972 daily and the county has reported 698,881 tests since the pandemic began.

County health officials also reported two community outbreaks Thursday, bringing the number of outbreaks in the past week to 22.

The latest outbreaks were reported in a food processing facility and a business, according to the county Health and Human Services Agency.

There are 59 active community outbreaks in the county tied to 1,389 cases and 11 deaths.

Latinos are still disproportionately impacted by COVID-19, with that ethnic group representing 61.3% of all hospitalizations and 45.4% of all deaths due to the illness. Latinos make up about 35% of San Diego County's population.

immediate success and demand for it, saying its hours would expand Thursday.

The free testing site will now operate from 6:30 a.m. to noon Monday through Friday and will focus on testing essential workers and American citizens who live in Tijuana, according to San Diego County health officials.

No appointments are necessary at the walk-up site, which aims to offer about 200 tests daily. People getting tested will not be asked about their

immigration status or who lives with them, health officials said.

``We know that communities in South Bay have been hit the hardest by COVID-19,'' said Wooten. ``The location was selected because of the increase in cases in the region and the number of people, especially essential workers who cross daily.''

Fletcher said Tuesday that the county's partnerships with its 18 incorporated communities were allowing law enforcement to step up efforts to punish egregious violators of public health orders.

A visit from county staff is the first action used, followed by a cease-and-desist order and then an order to close. If an entity refuses to close after that order, it will be cited and fined $1,000 -- as University Heights gym Boulevard Fitness was on Tuesday, Fletcher said.