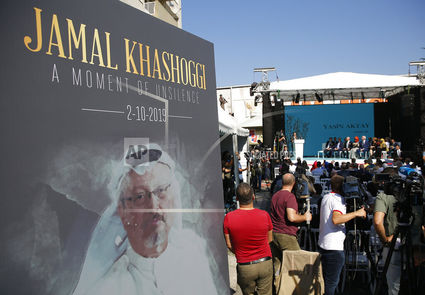 FILE - In this Oct. 2, 2019 file photo, a picture of slain Saudi journalist Jamal Kashoggi, is displayed during a ceremony near the Saudi Arabia consulate in Istanbul, marking the one-year anniversary of his death. Saudi Arabia's state television says final verdicts have been issued in the case of slain Washington Post columnist and Saudi critic Jamal Khashoggi after his family announced pardons that spared five from execution. The Riyadh Criminal Court issued final verdicts Monday, Sept. 7, 2020, against eight people. The court ordered a maximum sentence of 20 years in prison for five, with one receiving a 10-year sentence and two others being ordered to serve seven years in prison. The trial was widely criticized by rights groups and an independent U.N. investigator, who noted that no senior officials nor anyone suspected of ordering the killing was found guilty. (AP Photo/Lefteris Pitarakis, File)

DUBAI, United Arab Emirates (AP) - A Saudi court issued final verdicts on Monday in the case of slain Washington Post columnist and Saudi critic Jamal Khashoggi after his son, who still resides in the kingdom, announced pardons that spared five of the convicted individuals from execution.

While the trial draws to its conclusion in Saudi Arabia, the case continues to cast a shadow over the international standing of Crown Prince Mohammed bin Salman, whose associates have been sanctioned by the U.S. and the U.K. for their alleged involvement in the brutal kil...