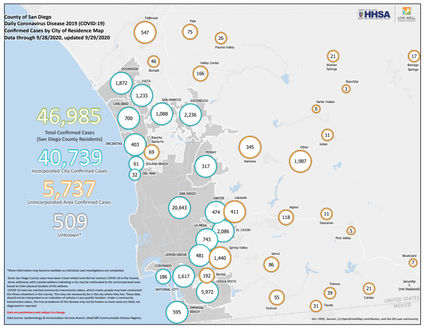 The new data comes as the county again avoided being pushed into the ``purple'' tier, the most restrictive in the state's four-tier reopening plan. The county will remain in the red tier for COVID-19 cases, with a state-adjusted case rate of 6.7 per 100,000 residents, county Public Health Officer Dr. Wilma Wooten told the Board of Supervisors during their meeting Tuesday.

California officials announced changes to the monitoring system for counties on Tuesday. County public health officials said their unadjusted case rate was above 7.0, at 7.2. However, because testing levels were above the state median testing volume, the county's adjustment level was decreased.

Meanwhile, outdoor playgrounds in parks, campgrounds and other publicly accessible locations are slated to reopen this week. The county announced Tuesday that its 100 playgrounds will reopen Wednesday. Several cities have also moved forward with reopening their playgrounds on Wednesday or later this week, according to the county Parks and Recreation Department, which is assisting them in addressing the protocols for safe reopening.

Protocols include social distancing, all people 2 years old or older mandated to wear masks, no eating or drinking allowed in playgrounds and limiting time to 30 minutes while others are present.

Of the 8,997 tests reported Tuesday, 3% returned positive, dropping the 14-day rolling average percentage of positive cases to 3.1%. The state-set target is less than 8%. The seven-day daily average of tests was 8,555.

Three new community outbreaks were reported Tuesday, in a business setting, a recreation center and in a hotel/resort/spa setting. From Sept. 21

While it's not possible to predict what the future holds for the state testing system, the county is exceeding testing numbers, Wooten said.

The county announced Tuesday that it will be increasing the number of COVID-19 testing sites across the region from 29 to 41 and the number of tests available to be administered by public health nurses through the county's lab contract with Helix will nearly double to about 30,000 weekly tests.

The county's testing positivity percentage is 3.8%.

``They play a vital role of reaching our hardest-hit communities,'' he added.

While the board took no new actions regarding policy, Supervisor Jim Desmond said the colored tier system is flawed, and that every business should be afforded the same opportunity to open up safely.

``We're not dealing with a widespread pandemic,'' Desmond said, adding the county's hospital cases are low.

He said the county should not base its economic future on a vaccine.

Supervisor Dianne Jacob praised county health officials, along with residents, for their efforts to combat the spread of the virus. ``Hopefully we can keep moving forward,'' she added.

San Diego State University reported three new cases of COVID-19 on Tuesday, bringing the total number of cases to 1,080 since Aug. 24, the first day of instruction for the fall semester.

These totals include 1,036 confirmed cases and 44 probable cases. None of the COVID-19 cases have been connected with instructional or research spaces since fall instruction began.

The eight confirmed faculty or staff cases are from staff members associated with an auxiliary of SDSU.