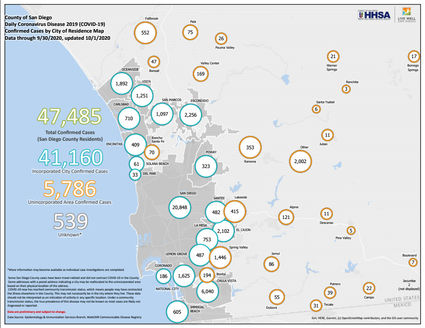 Three women and six men died between Sept. 16 and Sept. 29 and their ages ranged from mid-50s to late 80s. All had underlying medical conditions.

Of the 11,709 tests reported Thursday, 3% returned positive, bringing the 14-day rolling average percentage of positive cases to 3.1%. The state-set target is less than 8%. The seven-day daily average of tests was 9,086.

San Diego State University reported Thursday that 11 of the day's cases and four probable cases were connected to the university. In addition, 14 previously reported cases are now being associated with SDSU.

The new cases bring the total number at SDSU to 1,110 since Aug. 24, the first day of instruction for the fall semester.

These totals include 1,061 confirmed cases and 49 probable cases. None of the COVID-19 cases have been connected with instructional or research spaces since fall instruction began.

The eight confirmed faculty or staff cases are from staff members associated with an auxiliary of SDSU.

The university announced Wednesday it was extending a pause on in-person courses through Oct. 12. Effective that day, a limited number of courses will resume in-person. Most of those courses are upper-division or graduate level, and have been ``determined by faculty and academic leaders to be essential to student degree completion, licensure, and career preparation,'' university officials said in a statement.

Paul Gothold, San Diego County's superintendent of schools, on Wednesday said schedules for the county's many districts and charter schools

have not been drafted yet, but they are coming.

The county has expanded its total testing sites to 41 locations, and school staff, including teachers, cafeteria workers, janitors and bus drivers, can be tested for free at any one of those sites. A rotating testing program with the California Department of Forestry and Fire Protection was in the works for schools in the county's rural areas.

There are no state testing requirements for children, but all school staff who interact with children must be tested every two months. If schools were to open before San Diego County headed to a more restrictive tier in the state's monitoring system, they would not be affected. However, if a move to a different tier happened before schools opened for in-person learning, it would change the game plan, County Supervisor Nathan Fletcher said.

If parents do want to test their children for the illness, they have options, including Rady Children's Hospital, through Kaiser Permanente or through the 41 sites the county manages. Children as young as 6 months can be tested at the county-run sites.

On Tuesday, the county again avoided being pushed into the ``purple'' tier, the most restrictive in the state's four-tier reopening plan. The county will remain in the red tier for COVID-19 cases, with a state-adjusted case rate of 6.7 per 100,000 residents. The county's testing positivity percentage is 3.8%.

County public health officials said their unadjusted case rate was above 7, at 7.2. However, because testing levels were above the state median testing volume, the county's adjustment level was decreased.

According to state guidance, outdoor playgrounds in parks, campgrounds and other publicly accessible locations are allowed to reopen this week, depending on individual cities and counties. The county reopened its 100 playgrounds Wednesday and Carlsbad will reopen playgrounds Friday.

Protocols for safe reopening include social distancing, all people 2 years old or older mandated to wear masks, no eating or drinking allowed in playgrounds and limiting time to 30 minutes while others are present.