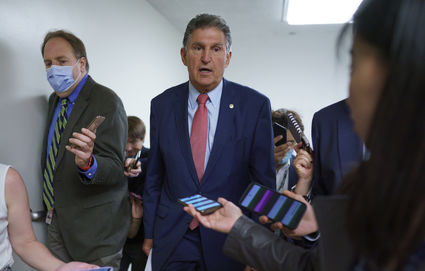 Sen. Joe Manchin, D-W.Va., is surrounded by reporters as senators rush to the chamber for votes ahead of the approaching Memorial Day recess, at the Capitol in Washington, May 26. Lawmakers still face standoffs on an infrastructure bill, police reform, voting rights, and a bipartisan commission to investigate the Jan. 6 attack on the Capitol.

WASHINGTON (AP) – A key Democratic senator says he will not vote for the largest overhaul of U.S. election law in at least a generation, leaving no plausible path forward for legislation that his party and the White House have portrayed as crucial.

"Voting and election reform that is done in a partisan manner will all but ensure partisan divisions continue to deepen,'' Sen. Joe Manchin of West Virginia wrote in a home-state newspaper, the Charleston Gazette-Mail.

He wrote that failure to bring together both parties on voting legislation would "risk further dividing and destroying the repu...