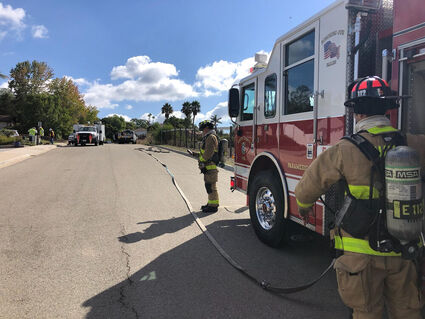 A natural gas line is being repaired on Buena Suerte south of the high school while another firefighter measures the amount of natural gas in the neighborhood.

Several houses in the neighborhood south of Fallbrook High School were evacuated by North County Firefighters Saturday morning, Oct. 9, at 8:39 am after a contractor hit a natural gas line at a residence, according to NCFPD PIO John Choi. "We have a broken and blowing gas line at 918 Buena Suerte. Several houses around the address were evacuated. Firefighters built a perimeter utilizing gas detection monitors around the incident and prepared for structure defense in the event the leaking gas erupted into flames. Choi said, "We have a pretty good airflow this morning so if we haven't evacuated homes it's because there are no gas readings."

The incident lasted four hours until SDGE was able to fully secure the gas line.

PIO Choi said, "The gas line has been repaired and the neighborhood is all clear."

After the incident PIO Choi said, "We want to remind our community, if you plan on digging on your property, please use DigAlert. DigAlert will come out and mark out underground utilities for free. DigAlert (Underground Service Alert of Southern California or USA/SC) was formed on September 13th, 1976 in response to a tragic and deadly accident that had occurred in Culver City 3 months prior. Since then, DigAlert has been serving nine Southern California counties (Imperial, Inyo, Los Angeles, Orange, San Bernardino, San Diego, Santa Barbara, Riverside and Ventura) in efforts to ensure these preventable accidents stay prevented. To contact them: