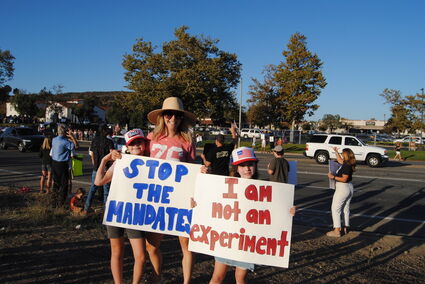 Jen Lara participates in the anti-mandate rally with her children, Kyle, left, and Gwen, Oct. 15.

The signs told the story: "Stop the Mandate," "Say NO to Tyranny," "I am not an experiment," "Not Anti-Vax, Anti-Mandate," and "Mama Bears Are Awake." And many more, all hand-made. Others carried American flags.

About 250 moms, dads, grandparents, and children participated Friday, Oct. 15, in the first anti-mandate rally sponsored by Fallbrook Freedom Fighters, a newly formed group that is opposed to the state mandates for school children to be vaccinated for COVID-19.

The rally was held at the corners of Mission Road and State Route 76 in Bonsall.

The organizers, Courtney Stevens and Lindsay Jones, were interviewed on KUSI-TV the day prior to the rally. The independent station also had news coverage on Friday night.

Stevens and Jones each said they were not comfortable with their children being forced to have the vaccine shots and wanted to keep them in school. The options of moving to another state or home-schooling are being considered, rather than a vaccine that may not be safe or needed.

A statewide protest was scheduled for Monday, Oct. 18, to pull children out of classes for the day. 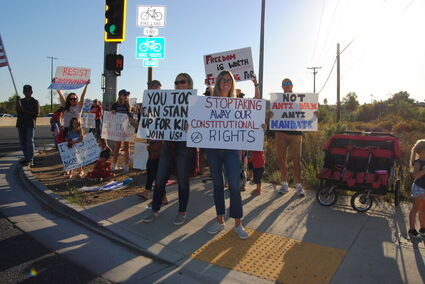 Parents and children protest the vaccine mandate for students.

There were no counter-protests at the rally. However, the property manager for River Village shopping center was not pleased. She had signs stating "no rally parking" posted and turned on the water sprinklers along the east side of Mission at the corner of Hwy. 76. She also blocked the entrance to the dirt lot on the west side of Mission.

"I represent the owners and it is our feeling that this is not an appropriate place for this type of event," said Una Murphy, who said she has worked as property manager for more than 20 years. "This is such a hot social or political topic, and we really don't want a rally happening on our property."

She said the past few days she has had as many people calling her opposed to the rally as the number of protesters. She also cited liability issues and her concern about children being so close to the busy traffic on Mission.