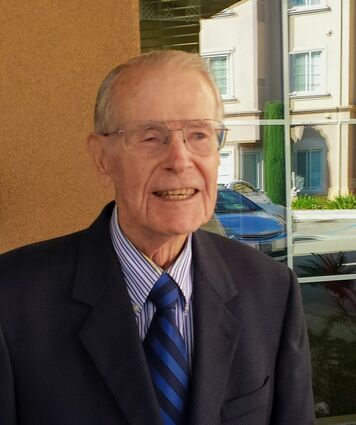 William E Hoganson, a Fallbrook resident for 27 years, passed away on Nov. 5 at the age of 97. Also a long-time resident of Garden Grove, California, Mr. Hoganson (Bill) is survived by three sons, John, Billy and Scott and daughter Jan, 13 grandchildren and 22 great-grandchildren.

Born in Watertown, South Dakota in October 1924, Bill was the grandson of Norwegian immigrants. His father John Hoganson, a furniture builder and musician, was raised in Wisconsin and his mother Ella (Ohnstad) was born and raised on a farm in South Dakota.

Bill met his lifetime sweetheart in sixth grade. He always said, "it was love at first sight." Eventually Bill and Jeanne attended GGHS where they were "high school sweethearts." Bill lettered in varsity football and track, starred in musical and theatre plays (along with Jeanne) before they graduated from Garden Grove's first high school in June 1942. However, nine months later, Uncle Sam had different plans.

The U.S. was at war in the Pacific. Within a week of graduation, Bill's father passed away. Then in March 1943, he was inducted into the U.S. Army at the Anaheim Draft Board (along with "200 other boys"). Bill would spend the next 33 months serving his country, ironically starting radio operator school in his birth state at Sioux Falls, South Dakota.

Bill found himself aboard the Britannic transatlantic ocean liner in December 1944 with thousands of soldiers amidst a naval convoy, Bill would say "as far as the eye could see" going to Liverpool, England. Over the next almost two years, Bill was a weather radio operator with the Army-Air Corp 40th Mobile Communications Squadron, attached to a P-47 fighter-bomber group in the 9th Air Force. He landed at Normandy about seven weeks after the initial D-Day invasion and provided weather information to tactical air support for General Patton's 3rd Army in France, Belgium (Battle of the Bulge) to Germany.

After the war, in December 1945, Bill returned home and three weeks later married his high school sweetheart. Another month later, Bill was enrolled at University of Southern California where he graduated after three years with a degree in music. He was a lead vocalist at USC and had opportunities to go into "show biz" but put his now young family of four first and chose teaching.

Bill was recruited to GGHS, enticed by a new performing arts auditorium "we are building just for you," said Principal Dr. LeRoy Doig, where he spent the next 25 years directing a music program that would be renowned throughout the Southwest and develop talent that would go into "show biz," including a producer, director, choreographer, Hollywood stuntman union director, television newscaster (Bill Griffith), radio DJ, and professional singers (including the lead singer for Elvis Presley!).

GGHS became known for its outstanding acapella and concert choirs, which would perform and win choral competition in California and Arizona. The Garden Grove community would also delight in coming to the GGHS auditorium for Christmas and spring concerts and especially for musical show productions that rivaled the professionals in Hollywood. Bill produced and directed musicals such as "Oklahoma," "Camelot," "Music Man," "Man of La Mancha," "Once Upon a Mattress," "Oliver" and others.

After teaching choral music (and English), Bill joined his bride as Shaklee Supervisors which Jeanne had started a couple years earlier. Their mission was to help people with their health so that they could live a productive life, while also sharing their faith in Jesus Christ with their customers. God blessed their business and their lives with many joyful years. Jeanne lived to be in her 90th year.

Bill will be interred at MiraMar National Cemetery and a Memorial service will be held at the First Baptist Church Garden Grove, TBD this spring. Any of his friends and students are welcome to attend.