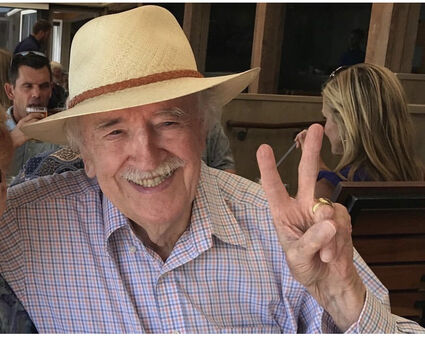 Romain (Kris) Krzmarzick, 91 years young of Vista, California, passed away on July 16, 2022, with his children by his side, after a short, unexpected illness.

He was the son of Frederick and Susanna Krzmarzick born on Nov. 13, 1930, in Garrison, North Dakota. He was the second oldest of five.

He grew up on a dairy farm. Kris would deliver milk during his lunch hour and got his driver's license at age 14 for exactly that reason. Kris was valedictorian of his high school class and matriculated at the University of North Dakota where he was part of the U.S. Air Force Officers program.

Following graduation, he served for 22 years in the military, most of that time as a pilot, retiring with the rank of Lt. Colonel. After retiring from the Air Force, he moved his family from Camp Springs, Maryland to Fallbrook, California in 1975. The second part of his professional career started then.

He initially worked for Engineering Sciences in Los Angeles, commuting 90 minutes or more between Fallbrook and L.A. each day in a tiny Honda Civic. While completing a Doctorate in Public Administration at the University of Southern California, he and Barbara built their dream home on the top of a mountain in northern San Diego with views of Palomar mountain.

One of his favorite positions was as an adjunct professor at San Diego State University. Following his tenure at SDSU, he was hired by TRW, a defense contractor in LA where two of his three sons, David and Tom, worked and moved to San Pedro, California with Barbara.

Kris retired at age 64 and moved back to San Diego County to their home on the mountain where he lived independently until four days before he died. The mountain and the view from his mountain were where he was happiest.

He and Barbara Tam Krzmarzick were married for 51 years, had four children together, and lived in eight different states during his time in the Air Force.

After Barbara's death in 2006, Kris married Jacklyn Sichi Krzmarzick in December 2007 and they had almost 10 loving years at "the ranch" before Jackyln passed.

But more than anything else, Kris was an extremely intelligent, intellectually curious, knowledgeable, kind, thoughtful and loving person. He was a friend to so many people. We liked to say, “he was a gentle man and a gentleman.” He loved to play bridge, he found beauty and comfort in his surroundings and lived a long and full life right to the very end. We miss him so much already; he will always be a part of everything we do and we will carry him in our hearts forever.

Donations may be made tin Kris' honor to Disabled American Veterans.