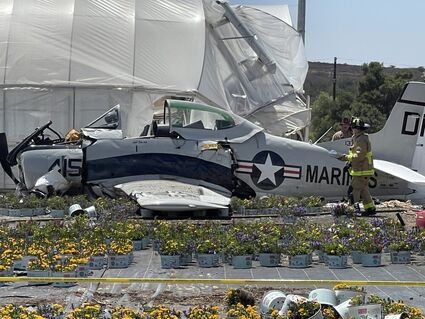 One person died and a second was critically injured when a 1953 vintage T-28B aircraft they were in crashed in Fallbrook, Saturday, July 23.

According to NCFPD spokesperson PIO John Choi, the pilot and one passenger were the only two people on board at the time of the crash.

The plane made a hard landing on a Altman Specialty Plants flower field in the 2500 block of Olive Hill Road, shortly after taking off from Fallbrook Airpark. No one at the nursery or the ground was injured.

The passenger, he said, died at the scene. Choi said when NCFPD arrived on scene, they found the pilot outside of the plane. People at the scene said that several of them from the Airpark and workers at the nursery helped extricate the pilot, and were working on freeing the canopy to get the passenger out when emergency crews arrived.

One man at the scene, who asked to be kept anonymous, was amazed at the human camaraderie that came together in the flower field to help save the pilot and his passenger.

NCFPD accounts its response time as 14 minutes from the time of call to arriving at the scene. Choi said the “only delay (which was short) is because the reporting call gave us the location of the Airpark, not Olive Hill. But we were at Olive Hill in 7 minutes.”

He reminds everyone to know the correct address when reporting an emergency. It saves valuable life-saving time.

The Anonymous caller said nursery workers and the men from the Airpark all pitched in to get hoses to the plane, to hose down any hot spots. Nursery works went to find nursery materials that could help pry the canopy off.

"What it meant to me, is good humans go to the great lengths to save a fellow man," he said.

He also said that several of them talked to the pilot and his passenger at the Fallbrook Airpark for awhile prior to their departure. "We had spent thirty to forty minutes with those men before they took off. They were great guys. Had lots of energy. Knew the plane and flying" he said. They watched the plane take off, and saw it rise in the air to about 75-80-feet before it suddenly stalled and fell to the ground at the nursery. "It was no longer than ten minutes after he took off that it stalled and dropped," he said.

The pilot was transported by NCFPD ambulance with injuries to Palomar Hospital. The identities of the two have not been released.

The aircraft registration is N787AS and according to the FAA registry, is owned by Mach One Air Charters in Chino. Mach One's website says they specialize in private aviation charter, sales and management.

The plane, explained pilot Tom Wilson, was a North American Trojan T-28 and is a single-engine, fixed wing, post World War II style training airplane, that was used for decades to train the Navy and Marine Corps pilots and crew.

According to the flight details on Flightaware.com, the plane took off from Chino Airport at 12:34 pm Saturday and landed at Fallbrook Airpark at 12:52 pm. The crash was then reported at 1:33 pm. 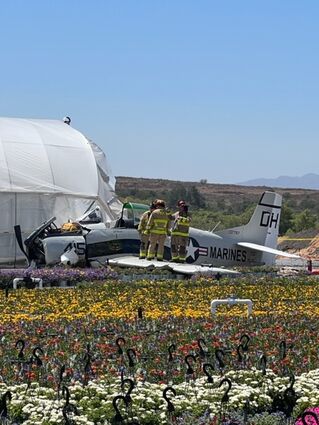 Another person said that the pilot landed at Fallbrook Airpark to pick up the passenger. Lisa Boylan, owner of Fallbrook Flight Academy said "Very often people will drive to Fallbrook to get picked up by pilot friends because it's an easy and uncongested place to land and depart."

The FAA and the NTSB is investigating the accident.

Thank you to Fallbrook pilot John Tomaszewski who contributed to this story.