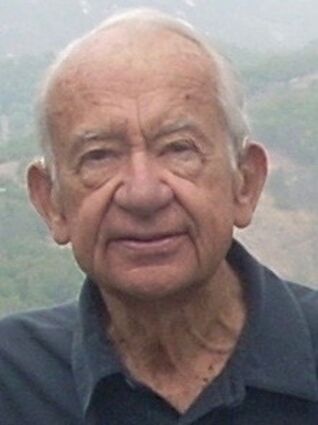 Bob was born Nov. 6, 1926, in Huntington Park, California, the son of Alfred Jacobson and Ursula Langley Jacobson. After graduating from Huntington Park High School, he enlisted in the U.S. Coast Guard and served until the end of WWII.

After his return to California, he enrolled at Stanford University where he majored in economics and was a member of Chi Psi Fraternity. It was here that he met his future wife, Genevieve McDuffee. After graduating in 1950, Bob spent a year at the University of Copenhagen where he met many of his Danish relatives.

He returned to the U.S. and, in February 1952, he and Genevieve, known to many as Duffy, were married. They had two children, Pete Jacobson of Evergreen, Colorado and Cathy Marich of Belgrade, Montana. They also had six grandchildren and three great-grandsons.

Bob began working for IBM in 1953 and remained with the company throughout his career. His job took them to Phoenix, Poughkeepsie, Pasadena, Wellington, New Zealand, and finally to New York where he worked with the international trade division until his retirement in 1990. His job took him around much of the world, and where he didn't travel for work, he and Duffy traveled for pleasure throughout their lives.

Bob and his wife Duffy moved to Fallbrook in 1991 and quickly became involved in the community. Both worked with the Fallbrook Music Society, and both were involved as volunteers with the Fallbrook Library. Bob was incredibly pleased to be on the Fund-Raising Committee for the expansion of the library and he was very proud of the hard work and dedication by the committee which ultimately led to the completion of the library building as it stands today.

Bob's family has requested that contributions in his honor may be made to the Fallbrook Music Society or the Friends of the Fallbrook Library.