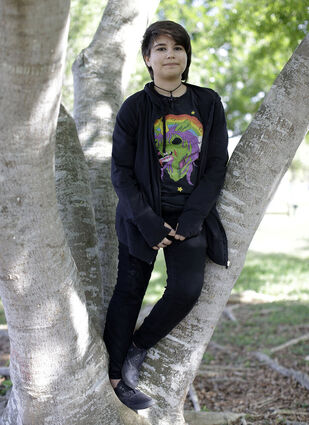 Alex Ramos, 13, a biological female, identifies as a transgender male, poses for a photograph in a park near his home in Homestead, Fla. Ramos realized in sixth grade he wasn't at peace with his biological female gender. He struggled to come to terms with it, afraid of how people at school would react. Ramos has since come out, and has the support of his mother and friends. (AP Photo/Lynne Sladky)

The number of young people identifying as transgender has soared in recent years, and females have come to make up the vast majority of patients seeking gender transitions, reversing a longstanding trend.

Some view this rapid demographic shift as evidence that peer influence is driving young people, females in particular, to transition.

"Adolescents are very susceptible to peer influence, so to suggest there can be no influence on young people is preposterous and flies in the face of everything we know about tee...