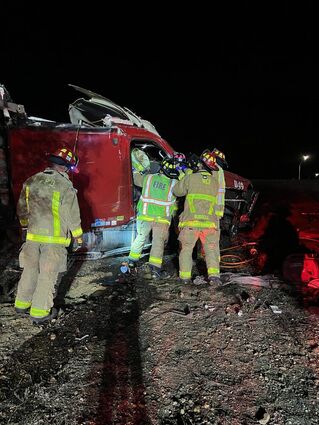 A semi truck driver required extrication after a crash in SB I-15.

Your North County Fire Protection District firefighters responded to a rescue traffic collision involving multiple patients on the Southbound 15 Freeway at Rainbow Valley Boulevard in Rainbow on Dec. 8, at 7:45 p.m.

Crews arrived on scene to find a two-vehicle traffic collision with one patient trapped in one of the vehicles. One of the vehicles involved in the collision veered into an area where there was road work being performed and two roadway workers were also struck by the vehicle and required transport.

There were a total of three patients involved in this incident. All patients were transported to Palomar Medical Center in Escondido via ground ambulances. The cause of the crash was investigated by CHP.

At 7:45 pm Thursday, Dec 8, three people were transported to trauma centers after an accident involving a semi truck and a vehicle in Fallbrook.

Two roadway workers were also hit on the side of the road. The semi truck driver required extrication.

The accident closed Lane 4 of the southbound I-15 near Rainbow Canyon until 10pm.

This is an early version story. More will be reported as information is available.