'Diary of the Dead' focuses on other concern of the living 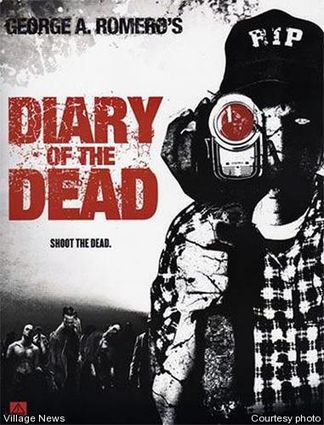 George Romero’s “Diary of the Dead” isn’t a remake of his “Night of the Living Dead.” It’s another zombie movie in which the living have to prevail over the undead or join them, but it also focuses on another matter of concern to those still living.

While some zombie movies require the undead to be burned, a zombie in “Diary of the Dead” can be stopped by taking out its brain. This can be done by gunshot, impalement, or other means.

It often has to be done, however, by a friend or relative of the zombie. Killing somebody the shooter or impaler knew, even if they’ve already died and are a threat, is not an emotionally easy task.

The movie begins with a family murder-suicide in an apartment building. The slain wife and teenage son surprise medical, law enforcement, and television news staff by showing signs of life. That made for a good television warning to many members of the local populace.

The members of a University of Pittsburgh film project had a different horror problem; director Jason Creed had to convince an actor that mummies don’t cover ground as quickly as Ridley was doing.

During a filming break they learned about the outbreak of unknown origin. Ridley opted to scramble for his family’s mansion immediately while others desired to continue the filming.

Jason, who had hoped to utilize his college experience for documentaries and was directing the horror film as part of a class requirement, chose to capture on camera what might soon become important history.

His first task was to find Debra, who was in an otherwise-abandoned dormitory and had no word from her family in Scranton.

After Debra and Jason were reunited, the group took a motorhome to Scranton with plans to drop off Debra at her house.

When zombies begin to attack the motorhome, Mary, the driver, runs over one and then hits two undead people standing in the street.

Mary has a hard time coming to terms with the reality that she killed people – even if those people were already dead and were a threat to the living.

After they pull over in the middle of the night, Mary shoots herself.

Mary still shows signs of life, and she is carried into the motorhome and brought to the nearest hospital. That hospital seems abandoned, and when undead patients and medical staff threaten the students and their professor they are shot in the head by one of the students to stop the threat.

Mary eventually becomes “one of them.” The group now has to come to terms with putting away someone they knew.

While the group has become focused on survival, Jason has become obsessed with documenting the ordeal. Recharging his camera and downloading information onto the Internet become more important than helping the group achieve its mission.

Romero’s original “Night of the Living Dead” was released in the late 1960s and drew some criticism not for its violent nature but for a black man and a white woman working together to avoid the fate of zombification.

In “Diary of the Dead” the students and professor encounter a black community which relishes being in charge now that the white establishment has fled town.

Once again the “us versus them” alliance is based on post-mortis rather than skin color, and the blacks not only replenish the white students’ supplies but also protect them against a black man whose fatal heart attack sent him to the other side.

As is the case with most zombie movies, the violence, the quest for survival by the living, and the need to put away the undead for good are part of the film and thus are to be expected.

If you like that type of film you’ll like “Diary of the Dead.” But the reality of killing in the case of necessity adds something to previous zombie movies, making it more than just a 21st-century update of previous horror films.