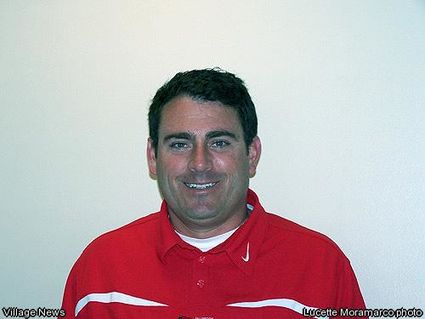 Silvey, who has spent the past eight years as the defensive coordinator for Carlsbad High School, will also join the faculty of Fallbrook High School.

He has taught English classes at Carlsbad High School.

“He has quite the amazing track record,” said Fallbrook High School athletic director Patrick Walker. “As a school we’re just really excited to have a guy here who’s going to build something special.”

Patrick Schmidt, who coached the Warriors during the 2006 and 2007 seasons, resigned in late November.

Schmidt indicated that he couldn’t dedicate the necessary time to the football team because he has his own business.

He also felt that Fallbrook High School needed a teacher on-site to be a football coach.

Schmidt, whose varsity teams posted records of 0-10 in 2006 and 2-8 in 2007, stated that the student-athletes deserved the commitment of a full-time school district staff member.

Walker incorporated that criteria into the search for Schmidt’s successor.

“Having a guy on staff is huge for me as an athletic director,” Walker said.

Walker noted that an on-campus coach can also work with other coaches as well as with the athletic director.

Silvey’s English experience at Carlsbad also allowed for references from faculty not associated with sports.

“This guy’s a tremendous teacher,” Walker said. “Carlsbad coaches and teachers said he’s a great leader and a man of great character.”

Silvey’s experience in Carlsbad’s English department includes all grade levels and has covered advanced placement, language arts, and other courses.

Silvey’s English curriculum for the 2008-09 academic year is still to be determined by Fallbrook Union High School District administration.

The Fallbrook Union High School District conducted a nationwide search for the new football coach and received more than 50 applications.

“We had a great pool of candidates,” Walker said. “I think just the way we went about doing this was the right way.”

Walker and the rest of an interview panel met with six of the candidates and narrowed the list to three finalists before selecting Silvey.

“It was interesting how it turned out to be some local guys,” Walker said.

In addition to being a linebacker on the Mater Dei football team, he also participated in the soccer and track programs at Mater Dei.

A knee injury ended his senior high school football season early, and before graduating from Princeton University as an English major Silvey spent one season on the Tigers’ football team.

He didn’t recover from his knee injury as he had hoped and gave up football to concentrate on his academic studies.

After his college graduation Silvey returned to football and to Orange County as the defensive coordinator for Santa Margarita Catholic High School.

Silvey was also with Carlsbad High School for three CIF championships; the Lancers won the San Diego Section title in 2002, 2005, and 2006.

“I haven’t really pursued a lot of these things,” Silvey said of the head coaching job. “I’ve been at Carlsbad for eight years and have been very happy there.”

The Fallbrook opportunity was a special situation. “It’s different from most other high schools,” Silvey said.

Silvey cited the support from not only the school administration but also the community, including community members who don’t have children at the school.

“That seemed like a really special situation,” he said.

“He had his hat out to one school,” Walker said.

Silvey was an early applicant, and the February 15 deadline for applications created a three-month lull period before Silvey was notified.

“Somewhat surprised just because of how long it had gone on,” he said of being selected.

The announcement of Silvey’s hiring was made March 7.

“Just his success that he’s had and of course how qualified he is is critical. His experience is critical to us,” Walker said. “His teaching skills are huge, too.”

Carlsbad and Fallbrook have been Avocado League opponents since Silvey began his career with the Lancers.

“I think another key was his familiarity with North County schools,” Walker said. “Coaching against him for the past eight years was important in the final decision.”

Ironically, the CIF Board of Managers is expected to approve a North County Conference realignment next month which would remove Carlsbad from the Avocado League.

Fallbrook would be the only current Avocado League school still in that league.

The 2008 football schedule is based on the belief that San Pasqual, Escondido, Torrey Pines, La Costa Canyon, and Mission Hills will be Fallbrook’s league opponents.

“I just feel now it’s really important to me to make good on that faith,” Silvey said of his hiring.

Silvey’s short-term goal of continuity in coaching is easy to achieve. “I’m just hoping right now to give [the players] a sense of stability,” he said.

“I really feel for the players in the program,” Silvey said. “There have been a lot of reasons not to stick around.”

Walker attended Edison High School in Orange County, which has had two football coaches in 35 years.

“We have a guy here who’s going to be here for a while,” Walker said of Silvey.

Silvey lives in Aliso Viejo with his wife and three children. Walker is hoping to provide Silvey with Camp Pendleton base access to reduce the coach’s commute to Fallbrook.

“We have a special coach. We really do,” Walker said. “We’re really excited over here. We really are.”

Silvey won’t set limits on the team but understands that rebuilding is a gradual process.

“We want to improve from where we were, really just improve each day,” he said. “That will take us someplace good.”