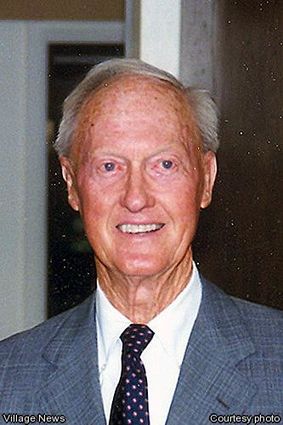 The first of three sons, Henry, who was known to his friends as Jim, grew up in Canton, OH. When he was 7, the family moved to New Hampshire, where his father taught at the Phillips Exeter Academy.

In 1931, Jim enrolled in the academy and attended Harvard University, graduating in 1940 with a degree in chemistry and metallurgy. During World War II, he served with the 367th Ordnance Maintenance Company of the Ninth Army, eventually helping the local government in Bremen, Germany, transition from war to peace.

He married Ann Mason on July 4, 1943, and after his honorable discharge with the rank of Captain, they settled in Los Angeles and raised three children.

Jim and Ann sold their home in Fallbrook in 1998 and settled in Ocean Hills, a retirement community in Oceanside. Together they celebrated 62 years of marriage. Ann passed away in 2005.

Optimism, cheerfulness and an innate curiosity in the world were qualities that endeared Jim to everyone who met him. Whether he was taking ballroom dancing lessons, writing his memoirs or creating a Facebook page (with the help of his granddaughters), he challenged himself daily and accepted the changes in his life with resilience and understanding.

A memorial service will be held Saturday, April 5, at 11 a.m. at St. John’s Anglican Church, Fallbrook.

Donations can be made to the Catalina Island Conservancy.