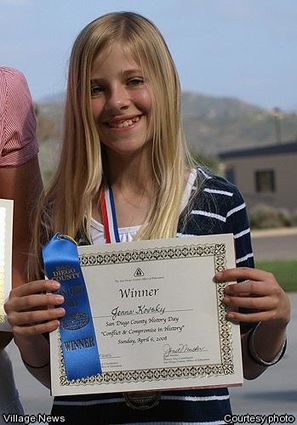 Kovsky, a sixth-grader at Guajome Park Academy in Vista, won for her self-produced documentary “Mustangs: Spirit of the West.” The award was presented to her by California State Assemblyman Joel Anderson during the San Diego County Office of Education’s “Celebration of Learning” ceremony on April 6.

Students from all over the country participated in this year’s National History Day competition, creating exhibits, posters, papers, performances and documentaries depicting the theme “Conflict and Compromise in History.”

Kovsky’s documentary traces the history of North America’s remaining wild mustang herds, from prehistoric times to today, and discusses how conflicts over land use have resulted in efforts to kill, capture, contain and ultimately conserve these majestic animals.

She will be presenting her documentary at the 25th annual California State History Day Competition in Sacramento May 8-11. Kovsky says she is grateful to her humanities teacher, Daniel Amaya, who was “very encouraging, supportive and enthusiastic.”